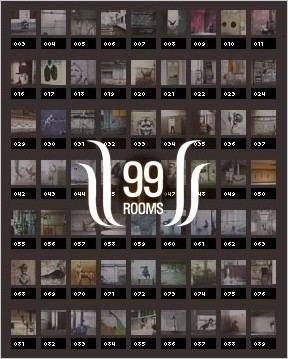 Is there a shortcut?
The 99 Rooms

is a Point-and-Click Game and visual project by Kim Köster, Richard Schumann, Stephan Schulz and Johannes Buenemann. Using pictures of the abandoned East Berlin Industrial sector overlaid with Köster's art, each room has a 'task' that you must complete to progress, similar to point-and-click style escape games. (However, the 'escape' part is only if you want to play through the whole thing straight — you can bounce around and skip rooms as easily as you please.)

The rooms are... weird, to say the least. While the whole thing isn't too scary, some of the rooms you do not want to view in the dark.

The project was launched in June 2004, and has since had over four million visitors. The people behind the rooms are working on another project, Ana Somnia, which follows the trail of our minds once we turn out the lights and are safe in bed. As of 2013, it is complete, and even relies on light sensitivity from webcams if your computers have any.