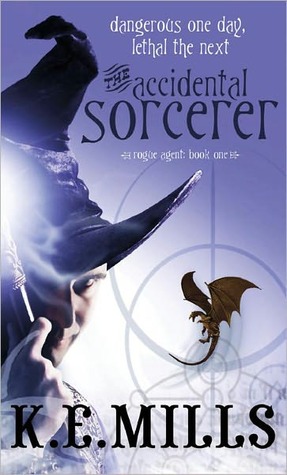 "The technical term for your condition is 'thaumaturgical distillation.' The slang term is 'rogue.'
"You don't know anything of the sort," Reg said darkly. "because there's a great deal you don't know about me. I may be a sweet and harmless bird these days, sunshine, but when I was a queen I did more with men's unmentionables than poke them!" - Reg - being... well, Reg.
Advertisement:

Events are set in motion by a thaumaturgical explosion at the staff-making factory Stuttley's causing Gerald to lose his job and considering he's a Third Grade wizard with a history of unfortunate mishaps behind him, it's going to be pretty difficult getting another position. Fortunately, his best friend Monk has connections and what can he find him? A job as Court Wizard in the kingdom next door! Unfortunately, things aren't quite what they seem in New Ottosland...

Gerald doesn't stay a Third Grade wizard though. That Stuttley's explosion somehow unlocked Gerald's true potentia. No one knows what he is exactly, not even Sir Alec of the Ottosland Department of Thaumaturgy. And when Gerald gets taken on as a janitor, he will have to be even more careful. He's a wizard alright. A rogue wizard.