Recap / The Amazing World of Gumball S2E8 "The Job" 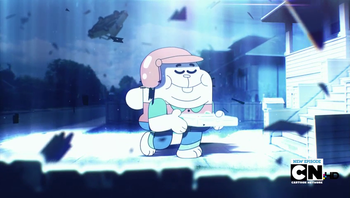 Larry: Look, I'm sorry, but tearing apart the fabric of the universe is not a dismissible offence!

Richard gets a job as a pizza delivery man, but Nicole is less than thrilled that her lazy husband has found employment, as she feels it's a sign of the end of the world.