Series / In Your Dreams 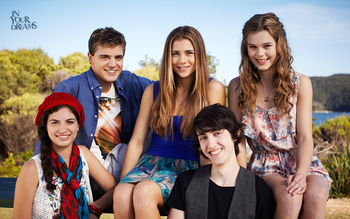 In Your Dreams is a German-Australian television series, set primarily in Germany but filmed in English.
Advertisement:

Teenage Australian twins Sam and Ben Hazelton are sent to live in a German castle for the summer with their eccentric distant relatives, the von Hasenbergs. Among other misadventures, they have to stave off the bankruptcy of the castle while foiling the plots of the greedy Uncle Hermann to steal the castle. Meanwhile, Sam is in a band with her friends Jack and Lucy back in Australia, and has to navigate music class, school drama, and band competitions from halfway around the world. Other major characters include Ben's crush Sophie, who works in the castle's cafe, and Marcus, who apparently does all the actual work required to run the castle.