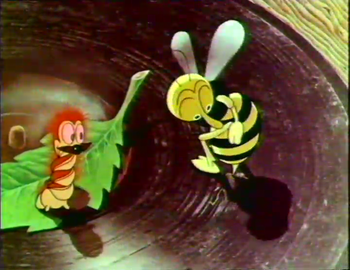 Verwitterte Melodie (Weatherbeaten Melody) is a 1942 animated short film made in Nazi Germany by Hans Fischerkoesen.

A cheerful bee goes flitting about a meadow one sunny morning. After drinking some nectar and goofing around with a berry that it treats like a soccer ball, the bee happens on a wind-up phonograph that has been abandoned in the meadow. By accident, the bee discovers that it can use the stinger in its tail as a phonograph needle to play the record. An up-tempo jazz number rings out as the bee circles around the record, stinger down. Other bugs and assorted critters come out and dance to the music. When the bee starts to get tired out from spinning around the record, the other little critters work together to help the bee and keep the party going.

Fischerkoesen was a commercial animator who was pressed into making theatrical shorts by Joseph Goebbels after World War II cut off Germany's access to Disney cartoons. Fischerkoesen was anti-Nazi, and this cartoon is believed to contain subtle anti-Nazi elements. Beyond the political messaging, Veritterte Melodie contains some amazingly sophisticated "multiplane" animation, simulating depth of field in a way that was very innovative for the era.