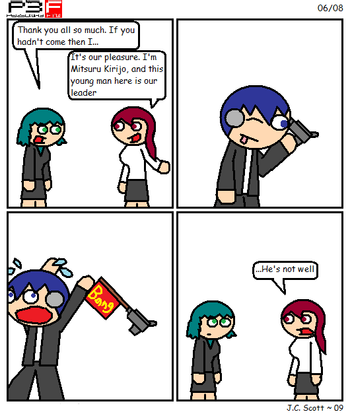 The silent protagonist of Persona 3 FTW in action.
Advertisement:

is a webcomic based on the game Persona 3 written and drawn by J.C. Scott aka Strain42. Every day during its run, one or more (often five for boss fights, even twenty for the game's final boss events) comics were posted involving the events of the day in the game. For instance, the page image was posted on June 8th and shows the aftermath of a boss fight on that day in the game.

The comic has been completed (three times), covering the events of The Journey, The Answer, and Persona 3 Portable (which focuses on the Female Protagonist); on April 6, 2011, the comic was declared be completely finished. The comic enjoys high popularity on The Duck, consistently ranking in the top ten comics during periods of high comic output; on January 6th, 2010, the comic first attained the number 1 ranking on The Duck. According to Strain42, more than 4.5 million views have been recorded from the first page to the last. On February 8, 2016, the author began republishing the comic on his new site here

Persona 3 FTW is the first entry in the Persona For The Win series, which also includes comics based on Persona 4 (Persona 4TW), Persona (Persona Won), and Persona 2 (Persona 2 Win)note there's also an abandoned series based on the Raidou Kuzunoha games (Raidou Kuzunoha the 19th

). Additionally, Persona 3 FTW and 4TW have a joint sequel in Persona 4TW Add-On, based on Persona 4: Arena, which sees the return of Mitsuru, Akihiko, and Aigis. And Fuuka and Elizabeth too.