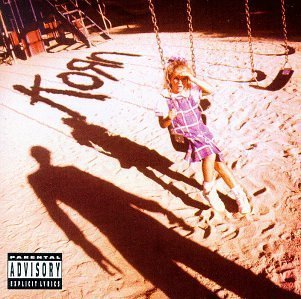 Korn is the self-titled debut album by Korn, released on October 11, 1994. It was recorded over a month-long period in Malibu, California and produced by Ross Robinson.

The album's music was a groundbreaking take on Alternative Metal, eschewing genre mainstays like guitar solos in favor of heavily downtuned guitars and funk-influenced bass, with angsty lyrics about child abuse, drug abuse, and bullying. The result was a sound that couldn't be described but which caught on in popularity immediately and, for better or worse, laid out the blueprints for the controversial genre of Nu Metal, which would take the world by storm at the end of The '90s.

While only peaking at #72 nearly two years after release on the Billboard 200, Korn ultimately sold four million copies in the United States alone, and over ten million copies worldwide. Though it spawned arguably the most polarizing metal genre since Hair Metal, it's also credited for helping to revive metal as a whole, which (Metallica, Alice in Chains and Pantera notwithstanding) was largely driven to underground purgatory after the fall of glam metal. In retrospect, the album has routinely been deemed one of the greatest and most influential metal albums of its time, with Rolling Stone calling it "the most important metal record of the last 20 years" in 2014.