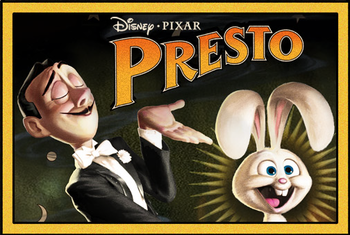 Presto is the one on the left, Alec is the rabbit's name.
Advertisement:

Presto is a 2008 short from Pixar Animation Studios, and was the opening part to their 2008 feature WALL•E. It was directed by Doug Sweetland, who would go on to co-direct Storks for Warner Animation Group.

Presto Digiotagione is a stage magician whose act utilizes two hats that are magically connected, Portal-style. As part of his act, he pulls his rabbit assistant, Alec Azam, out of one hat (Alec wears the other offstage). However, one night Presto forgets to feed Alec before the show, resulting in Alec being... less than cooperative.

This film was nominated for an Academy Award and Annie Award, and is included in WALL-E's home media releases.