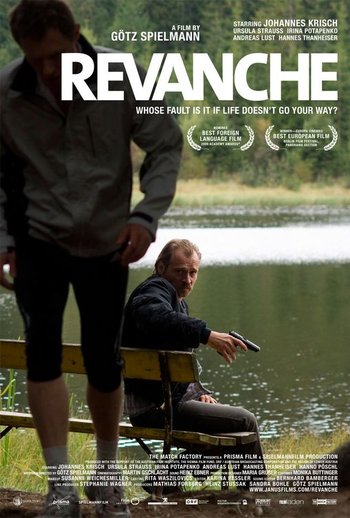 Revanche is a 2008 film from Austria, directed by Gotz Spielmann.

Alex Hausner is a small-time criminal, an enforcer for Konecny, who runs a brothel in Vienna. Alex has fallen in love with Tamara, a Ukranian prostitute who works at the Cinderella brothel. When Konecny starts talking about putting Tamara in an apartment and making her a High-Class Call Girl as well as his personal sex slave, Alex decides to take action. He will rob his hometown bank, use the money to pay off Tamara's debts (like many prostitutes she is being held more or less captive by debt), and they will go away together. Tamara is nervous about the plan and insists on going with him.

Alex goes home to rob the bank, his excuse being a visit to see his frail, lonely grandfather. Grandpa Hausner is often visited by Susanne, a neighbor who checks in on Grandpa as he lives alone at an advanced age. Susanne is mourning her recent miscarriage, a sad event which is even sadder because Susanne's husband Robert has fertility problems and the couple weren't expecting her to get pregnant in the first place.

Tamara sneaks away from her captors in Vienna. She meets Alex and they go off to rob the bank. Unfortunately, while Alex is robbing the bank and Tamara is waiting in the car, she meets Robert—who is a policeman. Tragedy ensues.