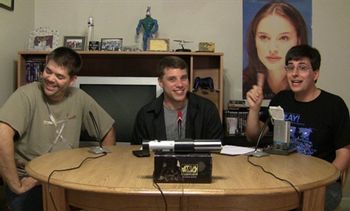 The Clan Of The Gray Wolf is a group of people (a "clan") who produce video review shows and blogs that focus on both Video Games and Tabletop Games, as well as other "geek-related media". They were also formerly a part of Channel Awesome, RetrowareTV and Reviewtopia.

The project seems to have retired, as their website is now inactive and their Twitter feed has not updated since 2016.

The members of the group are (left to right):