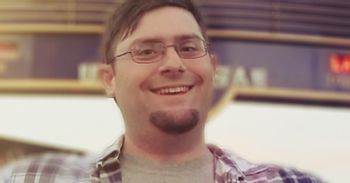 Charlie Callahan, formerly known as "Spazzmaster", is a filmmaker on Reviewtopia, Geekvision, and Reviewers Unknown. He reviews everything from games to theme park rides & hosted the reviewer community Livestream on Fridays & Saturdays. He is known for an epic storyline on par with Atop the Fourth Wall & having multiple characters all played by the same person. He is married to Haley Callahan of The Philosofan, who frequently appears on his show. He frequently appears on Some Jerk with a Camera and was also part of Project Million.
Advertisement:

Charlie's videos can be found on Geekvision.