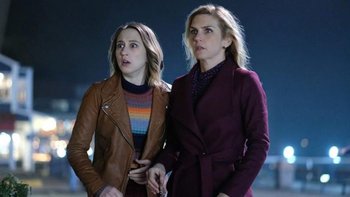 A good man is really hard to find.
Jordan Peele: Meet Annie Miller. Annie has always seen the world as a place where she could maintain control if she just played by the rules. But tonight marks the beginning of a change, both in her and in the idyllic town she's always called home. On the eve of her sister's birthday, Annie will be forced to contend with an event well out of her control, and a simmering violence about to boil over into The Twilight Zone.

One evening, a meteor shower occurs over a small town in Rhode Island and the town become fascinated with the rocks from space. Soon afterward, a rash of violent incidents break out among the men, leaving the unaffected women wondering what is going on. Caught up in the madness, Annie Miller (Taissa Farmiga) and her sister Martha (Rhea Seehorn) have to survive the night and find Martha's son, Cole.

Jordan Peele: Tonight, Annie Miller found herself in the center of a mysterious and violent epidemic. What she encountered was no material disease, but rather a plague of conscience. One that gave men permission to ignore decency, consent and fear. And tonight, all it took was a few "innocuous little rocks" to turn men into monsters here in The Twilight Zone.