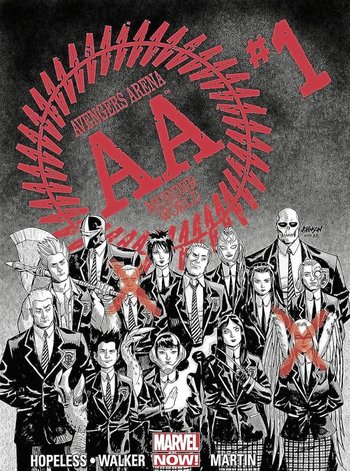 The series is notable for garnering a backlash when it was first announced, due to the fact that these characters from cult hit series could possibly die. Since teen characters/lesser known characters are generally C-List Fodder, Death Is Cheap doesn't apply to them — if they die, they can be Killed Off for Real with no chance of resurrection. Because of this, the series is divisive with many. The series lasted for 18 issues (February, 2013 - January, 2014), and is followed up by Avengers Undercover.

"Regard your soldiers as your children, and they will follow you into the deepest valleys. Look on them as your own beloved sons, and they will stand by you even unto death." — Sun Tzu, The Art of War