NOTE: Big spoilers are tagged, but other story details may not be. Not to mention there are several Walking Spoilers. Read at your own risk.

The dinosaur-morphing class leader of Avengers Academy who always aspired to be an Avenger. He's trapped alongside four other members of his team on Murderworld, and he wants to lead his team off the island and get back to his girlfriend. He also wants to avoid doing something he'll regret in order to protect them.

A bitter, sarcastic girl who lamented being trapped in a suit to avoid poisoning everyone within range. As she attends Avengers Academy and becomes a hero, she comes to term with her powers, becomes more vulnerable and nicer (well, slightly) and even gains a boyfriend in Mettle. Murderworld is taxing her sanity and strength as she tries to survive while coping with tragedy.

An Opposite-Sex Clone of Wolverine and trained assassin. She's served on the X-Men and even spent time on the X-Force, the X-Men's secret assassination squad. She joined Avengers Academy in order to rebuild her young life and do some soul-searching. Now she's thrown into Murderworld and trying to ignore her darker impulses.

One of the few characters at Avengers Academy who doesn't have any powers. What he does have is a old model Sentinel, who is his protector and best friend. His sentinel, while making him a huge threat, also makes him a huge target in Murderworld.

The Big Guy of Avengers Academy. Despite his red iridium skin, huge physique, and scary skull face, Mettle is a absolute sweetheart. When transported to Murderworld, Mettle's gentle soul is tested, especially to see if he would do anything protect his girlfriend, Hazmat.

Chase is a complicated boy: he's smart but lazy, friendly but prone to anger, very open but keeps secrets. He's transported to Murderworld along with Nico. He's survived battles against gods, killer robots, aliens and other things, but in Murderworld, he's afraid he'll survive again.

Please see the Runaways character sheet for that series' specific tropes about Chase.

Nico is the leader of the Runaways, who still has doubts about her leadership skills. She has a no-nonsense personality and an aptitude for magic, but with her powers on the fritz she may be less powerful than she previously was. Despite this, she's determined not to play into Arcade's hands.

Please see the Runways character sheet for that series' specific tropes about Nico.

From the Braddock Academy

A young Alternate Universe version of Captain Britain/Brian Braddock. At Braddock Academy, he was a cocky bully who threw his weight around and few dared challenge him. With his confidence being the source of his power, he's confident he has what it takes to survive Murderworld.

She only has the ability to fly, but Katy Bashir makes up for it in her intellect, craftiness, and ruthlessness. She is all too eager to start playing Arcade's game in order to save her skin. Despite her supposedly weak powers, Apex may be the biggest player in Murderworld. She has a twin brother named Tim that she shares the same body with, that due to genetic manipulation by her parents. She and Tim are also technopaths, something else Apex kept secret.

Cullen Bloodstone hails from the monster hunting Bloodstone family. While he may be small, he's fairly smart and resourceful with a sharp tongue ready with a quip. He has his friend Anachronism watching his back, however Cullen hides the fact that he has feelings for him. Cullen also hides the fact that he's possessed by a huge Eldritch Abomination-type monster.

Aiden Gillespie was a chubby gamer nerd who was constantly picked on at Braddock Academy. Somehow, he inherited the body of an immortal Celtic warlord complete with a huge axe, but he still has his pacifist nature with him. In Murderworld, he struggling with the bloodthirstiness and still trying to resist the urge to kill.

A girl hailing from the Marvel Universe's version of Atlantis. She's mean, cruel, and not afraid to do anything to get what she wants. In addition to her violent streak, she's also very voluptuous, and a temptress to all the boys at Braddock Academy.

Rebecca Ryker was a ordinary girl whose world turned upside down when a Deathlok (a re-animated cyborg) showed up at her house one day and killed her mother, brother and tried to kill her as well. She survived, but her father (Harlan Ryker, cybernetic genius and a creator of Deathlok) had to transform her into a cyborg in order save her life. Rebecca is innocent young girl who doesn't mean to hurt anyone, but there's no room for nice people in Murderworld.

Cammi Benally was just an average girl living in Coot's Bluff, Alaska until a prison ship crashed in her town, carrying Drax the Destoryer. From there, she becomes fast friends with Drax, escapes Earth into space with him, and gets involved in an interstellar war. She and Drax are separated, and from there she's spent months in space, surviving on her own. Her survival skills are top-notch, but she may have to play nice with others to survive Arcade's game.

Chris Powell was an ordinary high school student before he found an amulet that transformed him into a superhero with cosmic armor. Through the years, he's been fighting crime on his own and even team up with a few superhero teams such as the New Warriors and the Loners. Now in his 20s, he's still considered to be a teen superhero and is trapped on Murderworld but he's determined not to play Arcade's game and look out for the other teens.

Dania is a young girl who is part of the Bird-People (descended from The Inhumans), and the daughter of the original Golden Age Red Raven. She's trapped in Murderworld with 15 other kids and she's hoping to live and make an impact, just like her father.

A "late entrant" in Murderworld.

A very wealthy psychopath, who enjoyed building Deadly Games (called "Murderworlds") for the X-Men. He was something of a joke villain, as he never managed to kill any super hero in his games once he started targeting them. But now, he has somehow gained omnipotent power and has created his deadliest game ever, and trapped 16 young Marvel superheroes in his own personal hellhole.

Arcade's primary architect and builder of the new Murderworld. 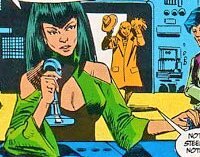 The Robot A.I. that controls much of Murderworld for Arcade and acts as his servant.