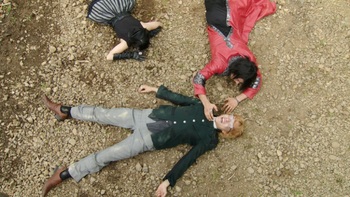 "Capable, loyal, and..."
Advertisement:
open/close all folders
In general
Episode 4: What Is That Prideful Chaser Thinking?
Episode 10: What Is In The Belt's Past?
Episode 11: Who Can Prevent The Dark Christmas Eve?
Advertisement:
Episode 13: Why Won't My Little Brother Put On The Brakes?
Episode 15: When Will These Feelings Reach You?
Episode 18: Why Is Lt. Otta Following That Guy?
Episode 20: When Did Kyu Saijo Become A Roidmude?
Episode 21: What Can Be Spoken By The Irregular Dead?
Advertisement:
Episode 26: Where Is Chaser Going?
Episode 27: What Is Go Shijima's Reason To Fight?
Episode 32: What Is Waiting At The End Of Evolution?
Episode 33: Who Claimed The Life Of Shinnosuke Tomari?
Episode 34: Who Claimed The Life Of Eisuke Tomari?
Episode 36: Where Will The Bullet Guide Justice?
Episode 37: Who Is Aiming For The Ultimate Taste?
Episode 40: Why Are The Two Genius Scientists Having A Conflict?
Episode 41: How Is The Golden Drive Born?
Episode 42: Where Is The Truth About The Goddess?
Episode 43: When Will The Second Global Freeze Start?
Episode 44: Who Loves Heart The Most?
Episode 45: What Is A Roidmude's Last Dream?
Episode 46: Why Must They Fight?
Episode 47: Who Will You Entrust The Future To, My Friend?
Episode 48: Final Story (Special Edition): The Case Of Ghost
Kamen Rider × Kamen Rider Drive & Gaim: Movie War Full Throttle
D-Video Special: Kamen Rider 4
Kamen Rider Drive: Surprise Future