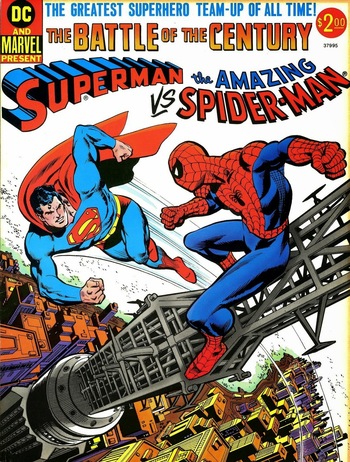 Spider-Man: After all, it isn't every day two living legends go around making history. Am I right, or am I right?
"We knew we couldn't keep our top heroes apart much longer. Readers everywhere were demanding a team-up of the best of the old and the best of the new. SUPERMAN, the first, most powerful, most famous caped crusader of them all — and SPIDER-MAN, the newest, most realistic, most popular wall-crawler on the scene today — both together, in one titanic, unforgettable adventure!"
— Stan Lee
Advertisement:

Superman vs. the Amazing Spider-Man: The Battle of the Century is a comic book jointly published by Marvel Comics and DC Comics in 1976, written by Gerry Conway with art by Ross Andru. It is the second crossover between DC Comics and Marvel Comics following their collaboration on an rather obscure comic book adaptation of The Wonderful Wizard of Oz entitled MGM's Marvelous Wizard of Oz, and the first modern superhero cross-company crossover.

Superman and Spider-Man must stop a world domination / destruction plot hatched in tandem by their respective arch-enemies, Lex Luthor and Doctor Octopus.

The issue is non-canonical, as it assumes that the heroes and their respective cities of residence, Metropolis and New York City, exist in the same universenote Sometimes New York City does exist in the regular DC universe, completely separate from both Metropolis and Gotham City even though both were created as stand-ins for NYC., with no explanation given as to why they had never before met or been mentioned in each other's individual stories.

In 1981, DC and Marvel published another crossover featuring both characters teaming up, called simply "Superman and Spider-Man", written by Jim Shooter and illustrated by John Buscema, but tossed The Incredible Hulk and Wonder Woman into the mix. A third crossover comic called "Batman vs The Incredible Hulk", featuring Batman and the Hulk was published in September, 1981.

Superman vs. the Amazing Spider-Man: The Battle of the Century provides examples of:

"And so, as our heroes fade into the sunset, we bid them a fond farewell — secure in the knowledge that peace reigns on Earth, and that justice is triumphant — for tonight, anyway."