Theatre / The Sultan of Sulu 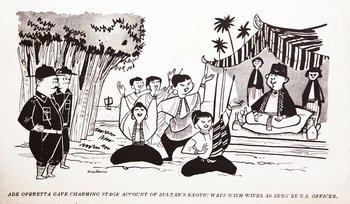 A rare, satirical musical play written by American playwright and humorist George Ade, with accompanying music by Nathaniel D. Mann and lyrics by Alfred G. Wathall. It debuted in Chicago in March 1902, made its way to Broadway in December of that year, and ran in a number of other cities, including Seattle and Boston, for a few decades, as late as 1931. No other performances were recorded until over seventy years later. In July 2009, the Canton Comic Opera Company restored and restaged it in Canton, Ohio, where it last ran in 1904, 1907 and 1922.

The play centres around, well, the Sultan of Sulu, named Ki-Ram. Sulu is an Islamic kingdom in the southern Philippines that at the turn of the 20th century found itself subjected to United States colonial rule, collateral damage from the fallout of the Spanish-American War. He, along with his eight Filipina wives, his Private Secretary Hadji, and his slaves and guards, get tangled up in the Americans' efforts to bring "democracy" and "civilisation" to the Muslim natives.

Although the Sultan Ki-Ram is a historical figure—he was based on Jamalul Kiram II, the then-reigning, Real Life Sultan of Sulu—George Ade never met him in person, and never even reached Sulu, although he did travel to the Philippines in 1900/01, and Kiram himself visited the United States several years later, in 1910. Ade based his depiction of Kiram largely on sensationalist stories from his journalist friends, not all of whom had met the Sultan personally either. The play, besides, was explicitly billed as satirical and Played for Laughs, meaning that the plot was largely fictionalised; surviving correspondence notes that the real Kiram had only one wife, and since Islam allows only up to four wives at any given point, he could not have been guilty of bigamy, let alone "octogamy", under either Sulu's Shariah law or the new American laws—not to mention that, this being a musical, Real Life people don't just burst into song, As You Know.... It is also unclear if the real Kiram ever knew his character had been satirised in an American play, let alone attended a staging even during his time in the U.S.note though apparently, according to a July 2009 Canton news article, his descendants were notified about that year's restaging, and even asked to have the play filmed for use as educational material in Sulu. The play generally ends well for him, though. This was in line with Ade's sentiments—he never officially joined the American Anti-Imperialist League, headed by such figures as Andrew Carnegie and Mark Twainnote who himself would later write searing indictments of the U.S. colonial troops' atrocities in Mindanao—but Ade also disagreed with America's forays into colonialism, and his play concludes with the U.S. occupiers relinquishing control back to the Sultan, as they were doing at the time to Cuba—on paper, anyway.

It is remarkable for being one of the very few dramatic or fictional pieces written by Americans about their colonial possessions—a scarcity made more obvious when compared to the wealth of British-authored literature about The Raj, including works by Rudyard Kipling, George Orwell, E. M. Forster, Joseph Conrad, and others.

For comparisons, see Amigo, a more recent film made in 2010, a relatively grittier piece on the Philippine-American War—the parallel colonial war being waged simultaneously in a representative town in the Hispanicised, Catholic north—with sweeping, disastrous consequences for the inhabitants. Also see its British (and now equally obscure) contemporary, Florodora, which premiered in almost exactly the same era—1899—and also takes place on a Philippine island, in particular revolving around the titular flower, and the perfume extracted from it, the business of which is a point of contention for several characters in the play.

The full text of the play can be found here.

The Sultan of Sulu features examples of: