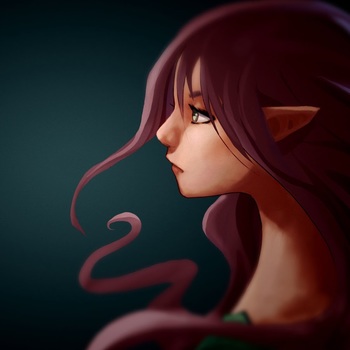 is a 2D fantasy animation by web-based independent company NathPro Studios, created by Ashton Mesmer. It began airing in early 2017.

The Last Lamia tells the story of Jason Alburn, a young man struggling to survive in a world controlled by the vile Avatech, who goes on an adventure to discover the secret behind the mythical, presumed extinct species of the Lamia. Upon arriving on their mysterious island, he finds that they are not extinct; a lone surviving Lamia named Amali who wants to eat Jason. However, he strikes a deal with the snake-woman that if he can prove humans are not as bad as she thinks within a month's time, she'll let him go. The two share adventures on the magical island and an unexpected romance even begins to form, though the threat of Avatech grows stronger as the ruthless assassin known as the Advocate tracks them down.

Spoilers are unmarked. Read at your own risk.

Tropes presented in the series: