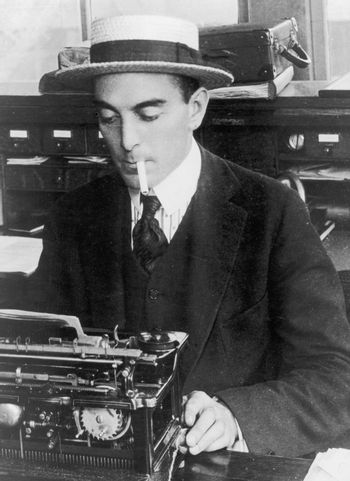 Ringgold Wilmer "Ring" Lardner (March 5, 1885 – September 25, 1933) was an American writer. He was primarily a sports columnist, but deserves inclusion here for his only novel, You Know Me Al (1916), and a number of short stories, some (but not all) of which had sports as a theme.

You Know Me Al is highly recommended for those interested in Satire and Black Comedy, and a straightforward writing style reminiscent of, well, sports columns for example. It's probably the first critical analysis of the hero worship and myth-making which is today considered inseparable from the sports world. Virginia Woolf, F. Scott Fitzgerald, and Ernest Hemingway were among Lardner's many admirers, so he must have been doing something right. S. J. Perelman admitted that Lardner should have had him arrested for stealing from his work.

Other noteworthy works are Gullible's Travels (1917; perhaps influenced by Mark Twain, Lardner apparently thought a humor writer has to have a travel book on his resume); Treat 'Em Rough (1918), in which Jack Keefe, whose letters home to "Al" made up You Know Me Al, writes home from the European Front during World War I; and June Moon (1929), a comedy play about songwriters written with George S. Kaufman.

His son Ring Lardner Jr. (1915–2000) was a member of the Hollywood Ten, a group of screenwriters who were blacklisted in the 1950s for supposed Communist sympathies. His great-grandson is writer/producer Donal Lardner Ward.