Literature / The Song of the Shattered Sands 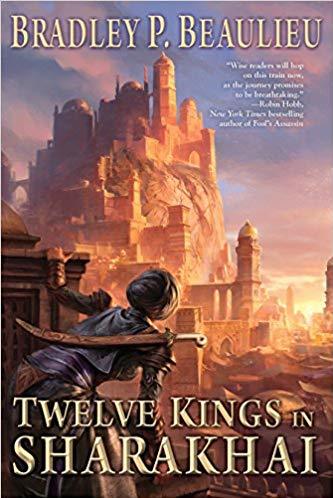 The Song of the Shattered Sands is a High Fantasy series by Bradley P. Beaulieu.

Sharakhai, the Amber City, jewel of the Shangazi Desert, has been ruled for four centuries by an alliance of twelve kings. Seemingly immortal, blessed by the gods themselves with longevity and mysterious powers, their rule is absolute. Though rival kingdoms scheme and the Moonless Host, an alliance of city rebels and desert tribes, constantly skirmishes, nothing seems capable of toppling the kings from their thrones.

Ceda is the White Wolf, the youngest champion of Sharakhai's gladiatorial arena, and her dream is to see the kings dead, in vengeance for her mother, who was executed on their orders. In her pursuit of the lost knowledge of the kings' weaknesses, she forges a bond with the ghoulish asirim who protect Sharakhai and uncovers truths about herself and the city that will shake the foundation of all she knows. She will also cross paths with her childhood friend Emre, who is being drawn ever further into the schemes of the Moonless Host, the budding scholar Davud, who was secret powers even he is unaware of; Ramahd, emissary of the kingdom of Qaimir who has his own enmity with both the Kings and the Host; and Ihsan, the Honey-Tongued King, who has his own agenda that may run counter to that of his brethren.

In time, their stories will converge... and the Kings' oracle predicts that a storm is coming that will shake Sharakhai to its foundations...

This series consists of:

As well as a prequel novella, Of Sand and Malice Made, recounting one of Ceda's adventures several years before the first book, along with several short stories.