Western Animation / What on Earth! 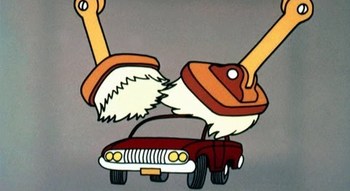 A spaceship from Mars makes an "earthshot" in an attempt to document conditions on Earth. The Martians soon determine that the dominant life form on Earth is the automobile. The Martian documentary then studies the habits and culture of the automobile, and how cars deal with the "pests" that infest them and so much of their world—namely, human beings.

The NFB has made the short available here