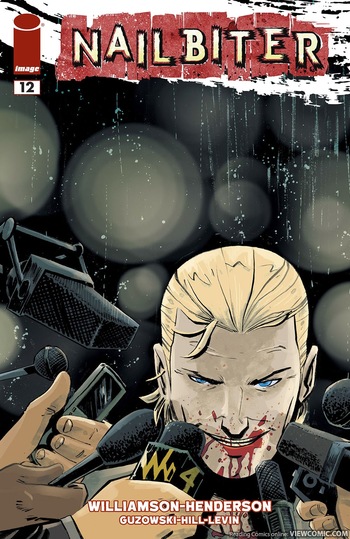 Nailbiter is a 30-issue comic series published by Image Comics, written by Joshua Williamson and illustrated by Mike Henderson, ending in March, 2017.

The series centers around the fictional town of Buckaroo, Oregon, which has produced sixteen of the United States' worst serial killers, each one with particular and peculiar motivations. Its most recent creation is Edward Charles Warren, otherwise known as "Nailbiter" due to his predilection for chewing off his victim's nails. By the series's start Warren has been caught by FBI agent Charles Carrol, however Carrol has since gone missing, leaving it up to his friend and intelligence agent Nicholas Finch to search for him. Nicholas decides to start his search in Buckaroo, where he begins to question why the small town has produced so many murderers.

an image teasing a continuation and in April, 2020 a new series called Nailbiter Returns began, and concluded with issue 10.