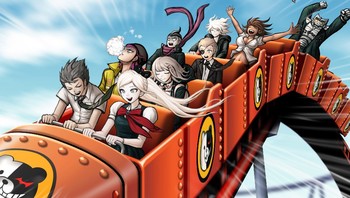 Chapter 4
Kazuichi: It appears it's just as Miss Sonia said...I'm just a pest...no, I'm not just a pest...I'm a total fucking pig...
Kazuichi: ISN'T THAT RIGHT, MISS SONIA?! IF I'M A FUCKING PIG, YOU CAN SAY SO!
Sonia: No, I believe you gave your all.
Kazuichi: HEY! WHY AREN'T YOU TEASING ME ANYMORE?!
Fuyuhiko: This guy...HE GETS OFF ON THIS!
Chapter 5
Chapter 6
Free Time Events
Island Mode