It's virtually impossible to list tropes for these characters without spoiling everything or creating Self Fulfilling Spoilers because of the large amount of surprising reveals and murderer/victim exclusive tropes this game contains just like its predecessor.

For the tropes related to them in Danganronpa 3, see here. 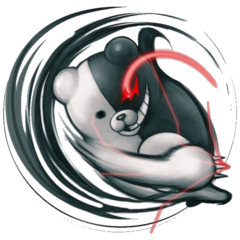 The self-proclaimed "Headmaster of Despair Academy", Back from the Dead. Monokuma is very eager to see society's biggest hopefuls start killing each other, so he hijacks Usami's "field trip", mutilates her into his "little sister" Monomi and imposes the "School Life of Mutual Killing" rules on the island once again. In reality, he is once again the persona of Junko Enoshima, now an AI, who hijacked the observer position in the program from Usami. 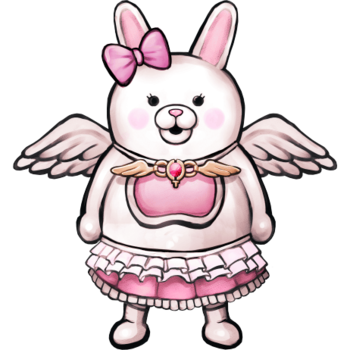 A stuffed rabbit that claims to be the class teacher of the students. She is responsible for the "class trip" and plans to cultivate hope within the students by encouraging them to befriend each other. Unfortunately, after Monokuma hijacks the island she is mutilated into his "little sister" Monomi and becomes his personal Chew Toy. Though she appears to take the side of the students, she is rather ineffectual at stopping Monokuma from imposing his murderous games upon them all. In reality, Monomi is an AI developed by Chihiro Fujisaki as an observer to the Neo World Program, making her Chiaki's "sister". In Chapter 5, she attempts to rebel against Monokuma, which only leads to her being executed alongside Chiaki. 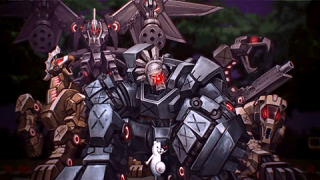 A collection of five animal-themed giant robots used by Monokuma to keep the students in line. After they're introduced, they rip Monomi to shreds and then take up residence in front of the bridges on the central island, blocking the students from crossing them to the other islands until Monomi starts destroying them one by one. 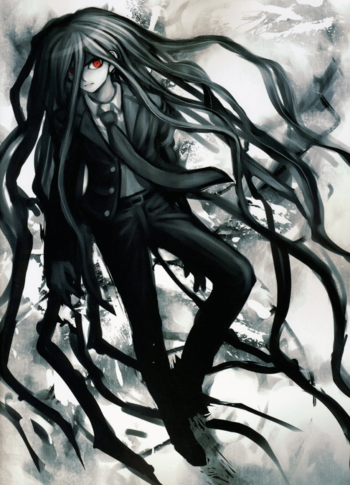 Voiced by: Minami Takayama (Japanese), Johnny Yong Bosch (English)
For the tropes related to him in Danganronpa 3, see here

A multi-talented student who was so gifted that he was awarded the title of "Ultimate Hope" (being a superhuman who would lead humanity into a golden era) and treated as a fellow mastermind by Alter Ego Junko for being the one who made this killing game possible by smuggling her into the program. His original identity is Hajime Hinata. In spite of being an unremarkable high-school student without any special talent, he was obsessed with the thought of joining Hope's Peak Academy so he volunteered for the school's "Hope Cultivation Program", not knowing the consequences.

The surgery wiped his original personality and replaced it with the constructed persona of Izuru Kamukura. Unfortunately, as a side-effect of the experiment, his ability to empathize with and find joy in other people was removed, and in his isolation he grew increasingly bored with the world. As a result, he became very susceptible to Junko Enoshima's manipulation, and she eventually used him to murder the entire student council of Hope's Peak Academy in her first "School Life of Mutual Killing", which triggered "The Biggest, Most Awful, Most Tragic Event in Human History".

Still deep in despair but sharp enough to see the consequences, he made an AI of Junko Enoshima and inserted it into the Neo World Program. It's heavily implied that he set Junko up to fail from his comment about how he'd use her as she used him. 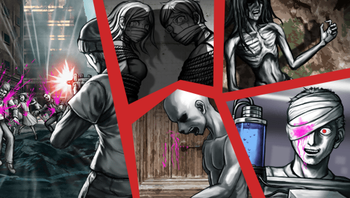 A group of Hope's Peak Academy students that fell to despair during their time at the school, and consequently fell prey to Junko's influence, to the point of accepting her Despair-based mindset as their own. The known members consist of Junko Enoshima, the original and true Ultimate Despair (as well as the Ultimate Fashionista/Analyst), her sister Mukuro Ikusaba, the Ultimate Soldier, Izuru Kamukura, the former Ultimate Hope, and all the members of the Island's School Life of Mutual Killing aside from Chiaki Nanami.

Following Junko's self-execution, fifteen of its members are now called the "Remnants of Despair", attempting to finish what Junko started until the events of the Killing School Trip. At the end of the game, five of the Remnants thwarted Alter Ego Junko's plan to fill the world with countless copies of herself, escaped to the real world, and stayed behind in Jabberwock Island to restore the rest of their friends back to normal.

Twilight Syndrome
For the tropes related to them in Danganronpa 3, see here.
Sato/Girl E 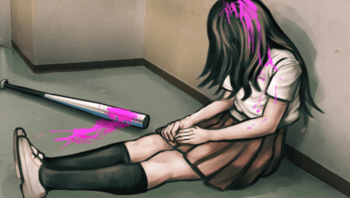 A student in Hope's Peak's reserve course and friends with a few of the students that made it onto the island (especially Mahiru.) After numerous threats made by Fuyuhiko's sister towards Mahiru, Sato confronts her about it, though the conversation eventually turns violent, with Sato eventually killing Fuyuhiko's sister and pinning the blame on a pervert who'd been in the news lately. Though Mahiru knows who the real culprit is, she keeps Sato's identity a secret, though Fuyuhiko finds out anyway and kills her. The whole story is eventually recreated in Monokuma's Twilight Syndrome game, causing Mahiru's murder as Sato's accomplice.
Natsumi Kuzuryu 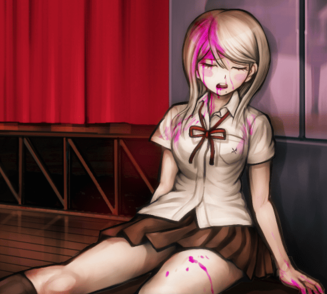 Fuyuhiko's younger sister, who styles herself as the Ultimate Little Sister. She apparently bullied Mahiru at school, and was killed by Sato when she confronted her about it, dying on the first day of the Twilight Syndrome murder mystery game.
Future Foundation
For the tropes related to them in Danganronpa 3, see here.
Future Foundation

An organization that Monokuma claims is responsible for bringing the students to Jabberwock Island and wiping their memories, and for causing the destruction of the world. This is, in fact, only partly correct. The Future Foundation is actually an organization attempting to combat the effects of the Despairing Incident, and opposes the machinations of Ultimate Despair, with the assistance of the survivors of the first game's mutual killing game. The students were actually brought to the island (which is actually a computer simulation) by Makoto Naegi in order to rehabilitate them after they fell under the influence of Despair.

Individual members are listed below.

A member of the Future Foundation, who (according to Monokuma) are responsible for taking away the memories of the students on the island and have placed a mole amongst their ranks. He is a returning character from the previous game, who joined the Future Foundation after escaping from the second "School Life of Mutual Killing" and is now working to rehabilitate the remnants of Ultimate Despair.

One of the members of the Future Foundation. She is a returning character from the previous game, and the daughter of the (original) headmaster of Hope's Peak Academy. She joined the Future Foundation after escaping from the second "School Life of Mutual Killing" and is now working to save the students from the clutches of Alter Ego Junko.

One of the members of the Future Foundation. He is the real Byakuya Togami, the brilliant and ruthless scion of the Togami family. After escaping from the second "School Life of Mutual Killing", he vowed to rebuild the Togami financial empire from the ground up and joined the Future Foundation. He is now working with Makoto and Kyoko to save the students from the clutches of Alter Ego Junko.

Overseer of the Neo World Program 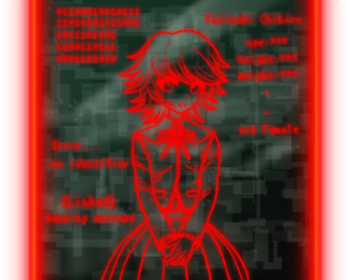 One of the members of the Future Foundation. Alter Ego is an Artificial Intelligence developed by Ultimate Programmer Chihiro Fujisaki (before his death during the second "School Life of Mutual Killing") and is currently the administrator of the Neo World Program, which was compromised by the Alter Ego Junko virus. Powerless to help the students directly, Alter Ego works tirelessly to prevent the collapse of the system and restrain the growth of the Junko virus as best he can.