All characters are recognizable by both of their names and spellings. If the only point of your edit is to change names, refrain from doing it. Same goes with the Ultimate/Super High School Level titles. Either one works.

It's virtually impossible to list tropes for these characters without spoiling everything or creating Self Fulfilling Spoilers because of the large amount of surprising reveals and murderer/victim exclusive tropes this anime and of its counterparts, "Future Arc" and "Hope Arc" contains.

For the tropes related to them in Danganronpa 2: Goodbye Despair, see here. For the real Ryota Mitarai, and for their homeroom teacher Chisa Yukizome, see Future Arc characters.
As a whole 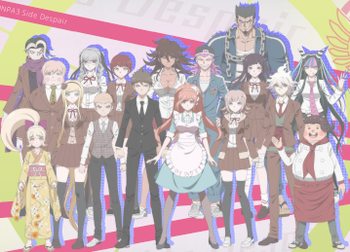 Class 77-B plus Hajime
The main class of Side: Despair, talented students who would become part of Class 77-B at Hope's Peak Academy. Tragically, despairing events would occur that would change them.
Chiaki Nanami 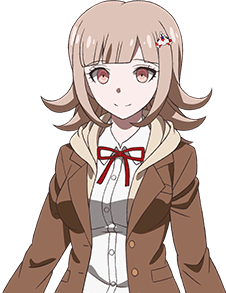 The secondary protagonist of Side: Despair. A member of Class 77-B, as well as its Class Rep. A gamer prone to dozing off, she is the only one who regularly interacts with Hajime, much to his confusion. 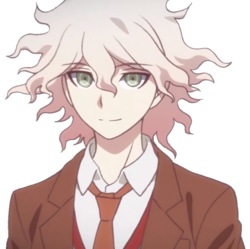 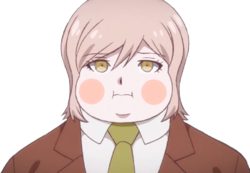 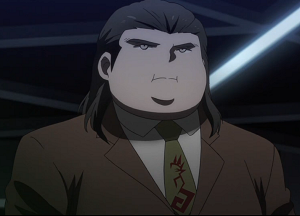 A young man without a name, family, or personal history to call his own. As the Ultimate Imposter, he lives by assuming the identity of another person right down to their voice and talents. In Despair Arc he attends Hope's Peak Academy as Ryota Mitarai, the Ultimate Animator. Also, he really likes food. 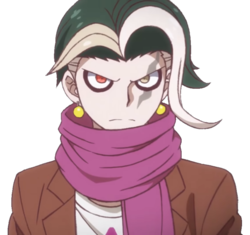 A member of Class 77-B. The Ultimate Breeder who's able to tame any animal, he has been successful in breeding endangered species. He keeps four hamsters, called “The Four Dark Devas of Destruction”. His first name is forbidden, and so cannot be spoken aloud. 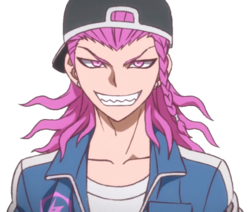 A member of Class 77-B. The Ultimate Mechanic, skilled with every machine. He has a flashy appearance and an insolent personality, but is a surprisingly cowardly person. He’s often playing the straight man in his class full of oddballs. Has a crush on Sonia, but she refuses to humor him. 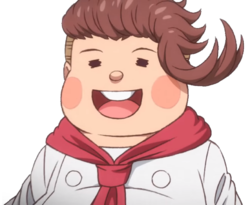 The Ultimate Cook with a passion for sex equal or greater than his zeal for food. He has a wide range of types and seems down for men as well, but his talent means that he naturally is in charge of the school kitchens. Behaves like a city dweller, but at times lets a few odd regional colloquialisms slip out.

The Ultimate Team Manager who has managed various sports teams. With his help, any puny school can become champion at the national level. Though he has a lively personality, he has a weak stomach, and so often has problems in the bathroom. 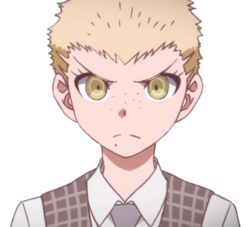 The feared Ultimate Yakuza, heir to the country’s largest crime syndicate, the Kuzuryu Clan. Because he dislikes crowding and being too familiar, he keeps a bit of distance between himself and his classmates. He’s the type who takes honor and moral codes seriously, and he will open up to someone he trusts. 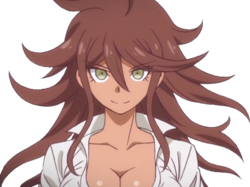 A super athlete with a dynamic figure. Her ability is first rate, but she tends to quit anything that doesn’t pique her interest, making her a bit of a problem child. Her thoughts are almost entirely comprised of eating and fighting. 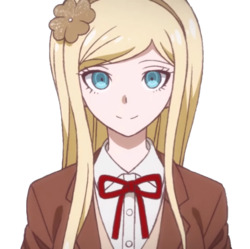 A study abroad student from the nation of Novoselic. Because in her home country her duties as princess prevented her from having friends her own age, she is enjoying her current school life. She is fond of trendy Japanese dramas, and sometimes uses strange Japanese. 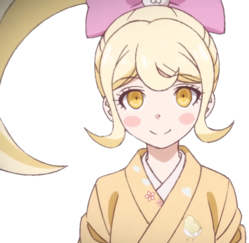 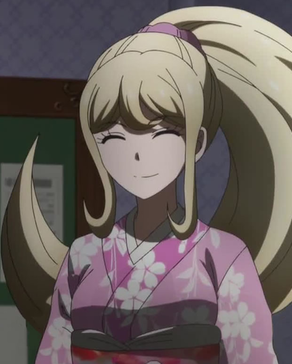 to see how she looks after the timeskip
Voiced by: Suzuko Mimori (Japanese), Kira Buckland (English)

The Ultimate Traditional Dancer, she is the hope of the Japanese Dance Society, who have high hopes for her future. Contrary to her child-like appearance and cute voice, she has an extremely cruel personality and often treats those weaker than her with no mercy. 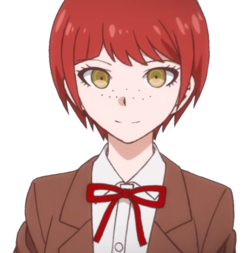 The Ultimate Photographer, recipient of countless awards and working as a pro-camerawoman. Skilled at taking portraits, but finds selfies to be embarrassing and so does not like them. A level-headed person who often takes care of her friends’ memories, though for some reason she’s very hard on boys. 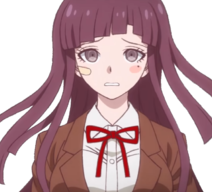 Ultimate Nurse, who finds meaning in life by serving others. She has no confidence in herself, and her overly valiant nature is her downfall, making her seem suspicious. As such she is not blessed with friends. A clumsy girl who often falls down, she has injuries all over her body. 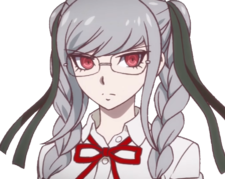 The Ultimate Swordswoman, so skilled that it’s said no one can match her. She has a taciturn personality and does not engage her classmates, but appears reliable. Even when there is no club practice, she always carries her shinai sword with her. 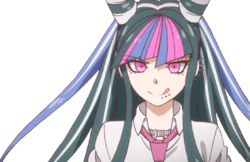 The Ultimate Musician, she used to be the guitarist for a popular girls’ band, yet they broke up thanks to musical differences. She now does solo work. Always excited, she acts as the class’s mood maker.

For the tropes related to them in Danganronpa 2: Goodbye Despair, see here.
As a whole
The other students at Hope's Peak Academy. Due to lacking any distinguishing talents, these students are assigned to the Reserve Course Department, a department designed to to get money from students who still hoped to earn an education due to the reputation of the School.
Hajime Hinata/Izuru Kamukura 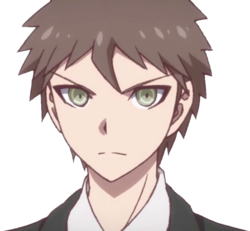 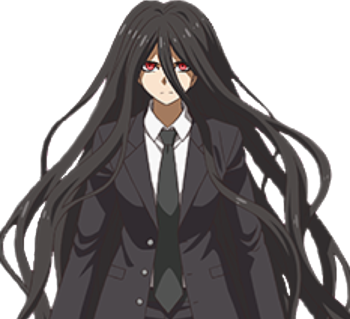 A student of the school reserve course. Having admired Hope's Peak Academy all his life, he wishes to gain his own talent.

For the tropes related to him in Ultra Despair Girls, see here.
Natsumi Kuzuryu 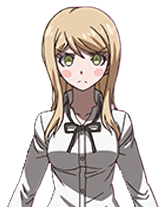 Fuyuhiko's little sister and a Reserve Course student. She is murdered by Sato. 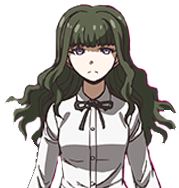 For the tropes related to them in Danganronpa: Trigger Happy Havoc and Danganronpa Zero, see here and here respectively.
Junko Enoshima 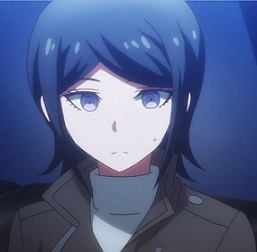 Member of the 78th class of Hope's Peak, former Private Military Contractor and the sister of Junko Enoshima. She helps her sister plunge the world into despair. 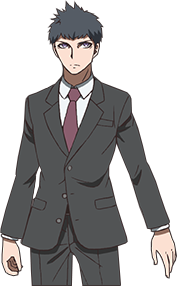 The headmaster of Hope's Peak Academy during the time the 77th and 78th Classes were students there. 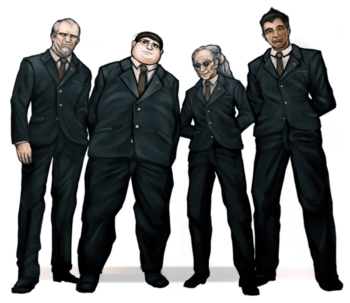 A secular sect (implied to be comprised of former faculty) that are the ones really running Hope's Peak Academy.