This is a partial character sheet for Danganronpa 2: Goodbye Despair. Visit here for the main character index. Visit here for the female students. Subjectives and audience reactions should go on the YMMV page. For the tropes related to them in Danganronpa 3: The End of Hope's Peak High School, see here, but keep in mind that this page does contain spoilers for the anime!

Ultimate ??? (as himself, actually a reserve course student)/Ultimate Hope (as Izuru) 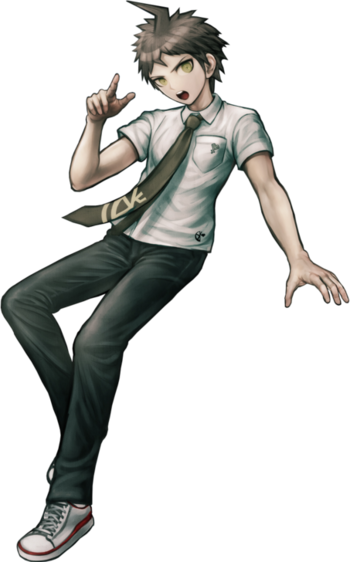 The Player Character. A young man who has always admired Hope's Peak Academy and finally achieved his dream of attending the school. Unfortunately, he has forgotten his past and the Ultimate talent that he was selected for. Hajime is a decent guy, but his personality is rough around the edges and very sceptical.

The truth is that he has no Ultimate talent, but his obsession with Hope's Peak led him to become the subject of the "Ultimate Hope Project", in which his identity would be completely erased and rebuilt as "Izuru Kamukura", the multi-talented "Ultimate Hope". Unfortunately, Izuru fell under the thrall of Junko Enoshima and triggered "The Worst, Most Despair-Inducing Event In Human History" by his participation in the first "School Life of Mutual Killing", causing the death of the student council. During the final trial, he is faced with the dilemma of remaining as "Hajime Hinata" and letting AI Junko win, or reverting back to "Izuru Kamukura". He ultimately chooses the latter, accepting responsibility for his bloodied past and resolving to create a new future for himself and his classmates, but as a result, is indicated to retain his old self. 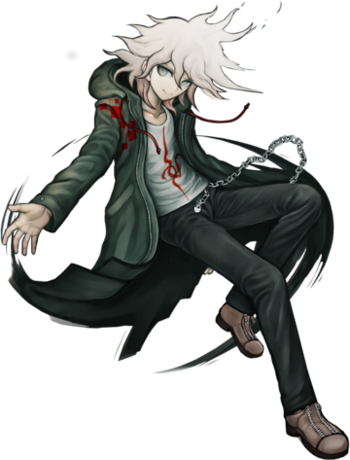 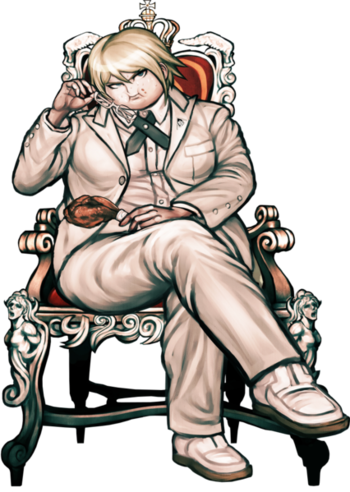 "A person like me has a responsibility to watch over you weaklings."
Voiced by: Akira Ishida (Japanese), Jason Wishnov (English)
Played by: Yosuke Nishi (Stage)

The scion of the wealthy Togami family, and one groomed to become a success since childhood. Byakuya immediately takes the position of leader amongst the group, claiming that he will use his superiority to lead them all to safety. Intelligent, calculating and utterly ruthless, Byakuya is a force to be reckoned with. Also, he really likes food. He attempts to prevent a murder in Chapter 1, and although he manages to foil Nagito, he is accidentally killed by Teruteru (who was gunning for Nagito). Later on, Hajime discovers that he was actually not the real Byakuya, but another student known only by their talent, namely as the Ultimate Imposter: A person without a home, relatives, gender, or even a name who could only live by assuming the guise of another person. 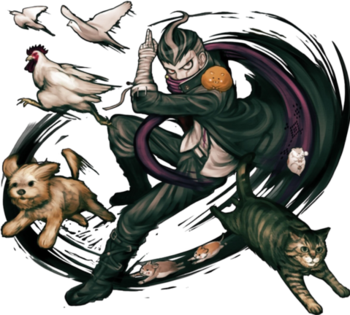 "You may call me...Gundham Tanaka! Remember it well, for it is the name that will one day rule this world!"
Voiced by: Tomokazu Sugita (Japanese), Chris Tergliafera (English)
Played by: Masahiro Inoue (Stage)

A highly eccentric individual who is rumored to be able to speak to animals. Gundham talks like a cartoon supervillain and aspires to use the dark arts to rule the world. He keeps a colony of hamsters, who he has dubbed the "Four Dark Devas of Destruction", under his scarf. He is the culprit of Chapter 4, emerging victorious in the Duel to the Death he challenged Nekomaru to due to being unwilling to simply give up and die when faced with choosing between committing murder or starving to death as a result of Monokuma's "motive". He is found guilty and executed by Monokuma, trampled to death by a stampede of animals. 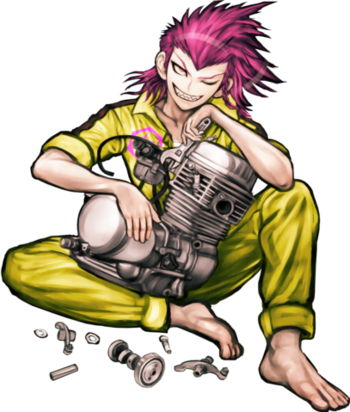 "At this rate, I'll take anything! A go-cart, RC toys, a baby carriage! Just let me tinker with something!"
Voiced by: Yoshimasa Hosoya (Japanese), Kyle Hebert (English)
Played by: Issei Ishida (Stage)

A mechanical genius with the ability to fix anything. In spite of his scary appearance, Kazuichi is actually rather timid and is prone to freaking out at the drop of a hat. He survives the final trial and returns to the real world with the other survivors. 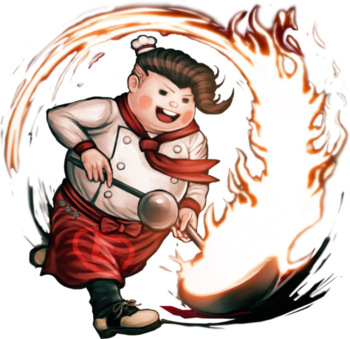 "On the streets, I'm known as the Ultimate Cook... But, could you guys call me the Ultimate Chef instead? It has more of a...big-city flavor to it, you know?"
Voiced by: Jun Fukuyama (Japanese), Todd Haberkorn (English)
Played by: TEAM Kondo, Shohei Nichogi (Stage)

A master of the culinary arts, who prefers to be called a "Ultimate Chef" because he thinks it sounds more sophisticated. Teruteru has as much passion for romance as he does for his cooking, and spends most of his time on the island chasing skirts. He becomes the culprit of Chapter 1 after he figures out that Nagito is plotting murder and tries to kill him first, accidentally killing Byakuya instead. He is found guilty and executed by being turned into a snack and "deep fried" in a volcano. 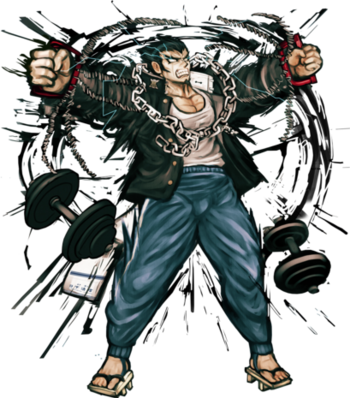 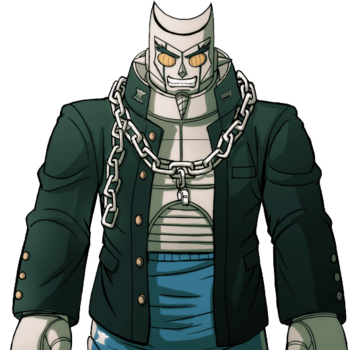 "Listen up. The secret to being healthy is a good appetite, a good night's sleep, and a good shit!"
Voiced by: Hiroki Yasumoto (Japanese), Patrick Seitz (English)
Played by: Kunihiro Kawashima (Stage)

A legendary coach with a knack for taking terrible teams and turning them into champions. Though he looks more like an athlete than a coach, Nekomaru burns with intensity and passion, and has a massive voice to match his massive stature. He is gravely wounded after protecting Akane from an attack by Monokuma, and remade into a cyborg - christened by Chiaki as Mechamaru. However, his new metal body does not prevent him from becoming the victim of Chapter 4 when he is killed by Gundham in their death pact.

"What's up with that face? You got a problem with me?!"
Voiced by: Daisuke Kishio (Japanese), Derek Stephen Prince (English)
Played by: Taizo Shiina, Ryujiro Izaki (Stage)

The baby-faced successor to the infamous Kuzuryu family, the largest criminal enterprise in Japan. Fuyuhiko's small stature and youthful looks hide a powerful temper and a large chip on his shoulder, and he has no interest in making friends with his classmates. In Chapter 2, he discovers that Mahiru was involved in the cover-up of his sister's murder, and Peko (his loyal hit-woman/bodyguard) kills her on his behalf after he plans her murder. However, after Peko is voted guilty he is unable to claim responsibility as the "true culprit" because it would confirm Peko's (incorrect) assumption that she was nothing but a tool to him. He tries to save Peko during her execution and loses an eye for his efforts. Between the loss of his eye and Peko as well as realising how cruel his actions towards Mahiru were, this humbles him greatly and he goes on to survive the final trial.