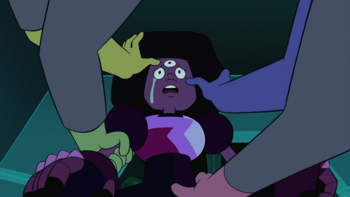 "They were forced together... They were forced to fuse! This is wrong!"
Garnet has called the Crystal Gems together for a meeting about Peridot. They found her escape pod but not Peridot herself. Garnet's theory is that if Peridot had a job to do, she'll likely be trying to keep doing it. The Gems and Steven are gathered together doing the laundry during this meeting. Steven is delighted to have the gems doing a chore with him. Garnet points out the chore wheel didn't work: mainly because Amethyst is too lazy to do hers, and Pearl enjoys doing all of them.
Advertisement:

Garnet goes on to explain that if Peridot reactivates the Kindergarten, the injectors will reactivate. Steven asks what they are, and Pearl reminds him what they are, and that he's seen them at the Kindergarten. She goes on to describe — much to Amethyst's chagrin — that injectors plant gem seeds in the Earth to incubate, and that the process depletes the earth of its resources. So if the injectors are allowed to continue, Earth will be...

They go to the Kindergarten and Garnet, after seeing what seems to be an undisturbed landscape, commands them to do a perimeter check so they can tell when something has entered. Steven goes off on his own and finds Peridot emerging from the nerve center, speaking about fusion experiments proceeding apace. She is startled upon realizing Steven is there, then demands to know if the others are there with him. He is not very good at lying. But before Peridot can move on him, the other Gems arrive, and attack Peridot!

Peridot tries to escape by running vertically up a wall, but a shrewd spear throw by Pearl stops that. Amethyst winds Peridot in her whip, but this time Peridot is prepared and gets free. Amethyst and Pearl give pursuit, but Peridot turns her fingers into a helicopter and takes off, saying she already got what she wanted and they can have the kindergarten.

Steven tries to run off after them but Garnet has held him off. She has surmised that if Peridot hasn't turned the injectors back on, she's doing something else and they should go see what it is. They find out on descending to the Kindergarten's command center: little animate appendages mismatched in color and connectivity — pink hand connected to green foot, yellow arm connected to green hand, and the like — begin falling from the ceiling. One emerges from an incubation cylinder, its glow indicating it's several gems trying to reform into themselves like the Crystal Gems do after being "poofed", but unable to. It makes several abortive attempts to take several different forms, glitching horribly with every new change. When it finally finishes forming, it's a monstrous, undulating leviathan of multicolored limbs that creeps menacingly toward Garnet and Steven.

Garnet is absolutely horrified to the point of being unable to form sentences as the thing's hands grasp her and blindly grope at her. Steven is confused. Garnet is so freaked out that her fusion begins to come apart, until Steven calls out to her. She pulls herself together — literally — and tearfully apologizes to the fusion monster before destroying it. It vanishes in a poof and reveals its gem — or, rather gems — as Peridot has taken shards and pieces of shattered gems and force-fused them into shard clusters. Garnet is so disgusted and enraged by the sight and realization that the Homeworld forced gems together without their permission that her Ruby and Sapphire inner selves come to the surface and speak their thoughts alive as she/they realize what happened to their lost friends who fell on the battlefield during the fight for Earth, and whom Rose and the Gems could never find.

Amethyst and Pearl return, empty-handed; Peridot got away. A few of the tinier fusion experiments are still about. Pearl asks in curiosity what they are. Garnet doesn't explain. She only commands them to poof and bubble every last one, and that they cannot let any escape.

Back at the temple, some time after the cleanup of the Kindergarten, Steven is washing more laundry. Garnet stands by the dryer, pensive and quiet until Steven asks how she is. She dodges, answering about the laundry but he presses. Garnet is sorry Steven had to see the abomination of the fusion experiments, because it's not real fusion, not a bond. Steven asks what fusing is like.

Steven elaborates that he wants to know what it's like to be a fusion all the time, and asks whether she forgets she was ever two people. Garnet describes that she feels like one being, and Ruby and Sapphire's love is so strong she will have no problem staying Garnet for a long time. As Garnet's smile returns, a sock with blue toe and heel is blown off the top of the basket. Garnet catches it before it can blow off the edge, and matches it with a sock that has a pink heel and toe, saying they should never break up a matched pair.