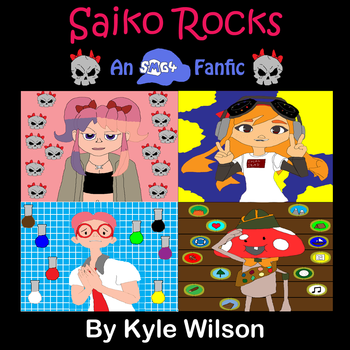 . It's his second story posted on FanFiction.Net and DeviantArt, the first being Despicable vs. Devoted.

The story centers around Saiko Bichitaru making her grand return to the rock star business two years after taking down Bob's ego with her breakthrough hit "Darkest Hour". For this return, she's assembled an all-new band, with the now-human Meggy Spletzer on the drums, Shroomy on the bass guitar, and Whimpu on the keyboard. All four of them combined produce great music their audience loves, and Saiko was reliving her dream.

But while she was once again enchanting the world with her music, a young amatuer musician named Senbo Mazushi is aspiring to be a rock star just like Saiko. To him, the key to her success is her guitar, but when he goes to her house and asks to borrow it, she refuses to let him. Senbo, however, wasn't going to give up on her guitar so easily, and makes it his sworn duty to play it by any means necessary, though Saiko is quick to outwit him with each attempt.

With Senbo's tricks alone not working, his girlfriend Aibo Sumato devises a plan to distract Saiko and drive her out of her own house, allowing him to sneak in and play her guitar while she's gone. This plan involves pretending Tari's life is in danger, and knowing how protective Saiko has been of her lately, they were counting on her to come to Tari's rescue. But they may end up getting more than they bargained for, now that everyone thinks Tari's dead.

The first chapter of the story was posted on both FanFiction.net

on May 8th, 2021—the same day of SMG4's tenth anniversary. The latter website shows the illustrations, cover page, and character designs of Senbo and Aibo. Since then, Kyle has been making weekly updates to the story on the same day of SMG4's weekly videos, finally finishing it on August 21st with a total of sixteen chapters.