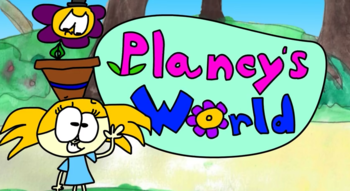 Plancy's World is a webtoon made by Lenstar Productions, the same people who brought you Mugman.

The webtoon stars Plancy, a ditzy girl who stars in her own Dora the Explorer parody, which goes horribly wrong due to an angry flower named Flower that lives in a flower pot on Plancy's head and constantly gets in the way of Plancy's interactions with the viewers.