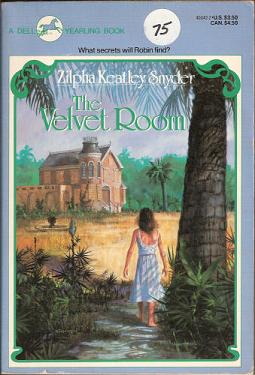 The Grapes of Wrath for kids, but with a much happier ending.

A beloved children's classic by Zilpha Keatley Snyder written in 1965, this book tells the tale of young Robin, the middle child in a family of migrant workers traveling across California in their Model T during The Great Depression. Prone to wandering off in her own little world, intelligent but introverted, enamored of books and history but otherwise uninterested in life, she is suddenly thrust into new circumstances when her father is taken on as a mule hand and her family is hired as apricot pitters at the McCurdy ranch.

Befriending Gwen the rancher's daughter and Bridget, a kindly old woman who lives nearby, she is given a key by the latter that allows her entrance into the old, abandoned Palmeras House, where she discovers the timeless, beautifully furnished library that she calls the Velvet Room. As time goes by it becomes more and more of a haven for her—a place to read and dream, a place to bury her fears and doubts, to get away from the confusion she feels inside, a place to count on. Then she is abruptly faced with a critical choice...and must decide where she truly belongs, who and what is most important to her.

The book had been long out of print, but its fans, tired of trying to locate, trade, and buy used copies of the book, petitioned for it to be reprinted—and at last, thanks to the Author's Guild and Backinprint.com, their wish has been granted.

Absolutely nothing to do with the location of the same name from the Persona video games.