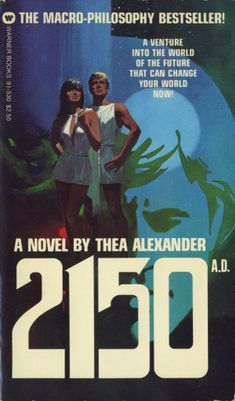 A future more about society than technology.
2150 A.D. is a novel written by Thea Alexander in 1971. It's about a man named Jon Lake who lives with his roommate Karl. Jon has an astral dream about living in the year 2150 A.D., a veritable utopia where humanity is evolved to a very advanced, loving, and peaceful degree. He travels back and forth between that year and the current year of 1971. His goal is to attain Macro Awareness to bring himself to 2150 A.D. permanently.