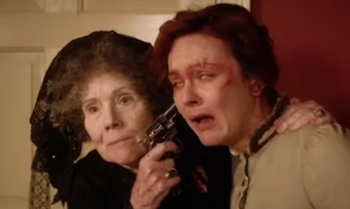 "Please, come to me, Ada. Oh, my child. You have always been so very useful."
The Great Intelligence: The Doctor's life is a open wound. And an open wound can be entered.
The Doctor: No, it would destroy you—
The Intelligence: It will kill me. It will destroy you. I can rewrite your every living moment. I can turn every one of your victories into defeats. Poison every friendship. Deliver pain to your every breath.
— The Great Intelligence planning to wipe out every victory of The Doctor, Doctor Who, "The Name of the Doctor"
Advertisement:

Having been around since 1963, Doctor Who and its various related works have produced a variety of aliens, monsters, and other villains over the years, with some reaching a special level of evil.