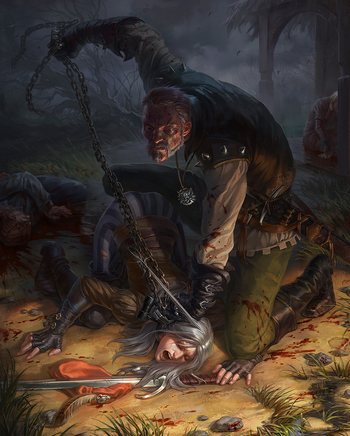 "You will die, Rat. Are not you afraid? That’s because you do not know what death looks like."
"Remember your legends. Legends about people missing and returning after a year, only to see the graves of their relatives covered by grass. Are you going to say that they were pure fantasy, things taken from stories? You are wrong. For centuries, people have been kidnapped, snatched by riders, by the Wild Hunt. Abducted, exploited and then thrown away like an empty shell once consumed. But do not expect to be that lucky, Zireael. You will die here, you will not see the graves of your friends."
—Eredin Bréacc Glas (King of the Wild Hunt) to Cirilla Fiona Elen Riannon (Ciri), Lady of the Lake
Advertisement:

One of the main themes of The Witcher series is that humans can be the biggest monsters. While the saga runs mostly on gray morality, there are exceptions that reach the highest level.