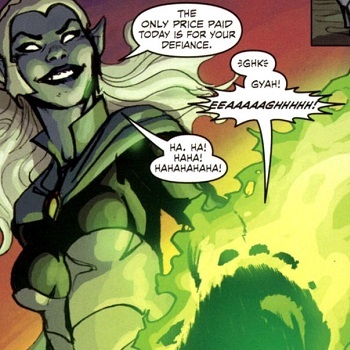 God save us from the Empress!
"Ah, the rest of the team is here! Fantastic! Coran was calling to inform you that I have begun my greatest experiment: Galactic chaos! And I found the best way to incite disorder is to cut off the head—which is why I have decapitated the Galaxy Alliance. Chaos is already reigning here on Earth. My human lab rats are performing. I figured global chaos would make it nearly impossible for the Voltron Force to stop me, which you will inevitably attempt to do. See you soon!"
—Maahox, Voltron Force, "Black

The Defender of the Universe has faced his fair share of diabolical enemies. The following are the worst.

Entries in each group are by release/publication date.