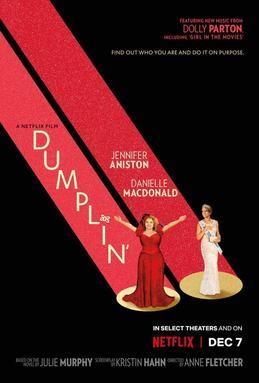 Dumplin' is a 2018 Netflix drama film starring Jennifer Aniston, Danielle Macdonald and Dove Cameron and heavily featuring Dolly Parton's music. It is based on the 2015 young adult novel of the same name by Julie Murphy.

Willowdean (or Dumplin', as her mother calls her) is the plus-size, teenage daughter of a former beauty queen. She signs up for her mom's pageant as a protest that escalates when other contestants follow in her footsteps, revolutionizing the pageant and their small Texas town.