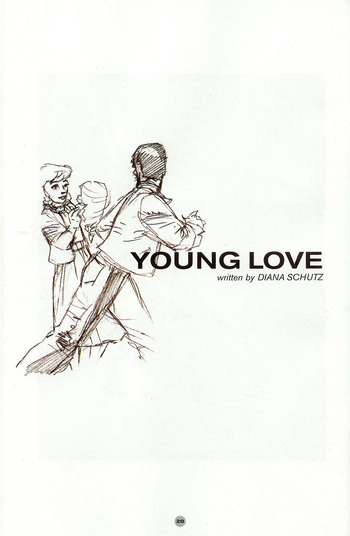 "Hey-Hey! Linda Lee! You sure do look pretty..."
I AM strong. Strong enough to face the truth — and face you again. You're the one who needs to be strong, Linda — in your heart, where it really counts.
— Dick Malverne
Advertisement:

"Young Love" is a Supergirl 2004 short story published in Solo Vol 1 issue #1, written by Diana Schutz with art by Tim Sale. It picked up a plot thread left dangling from the original Supergirl's story, bringing it to a powerful and heart-wrenching conclusion.

Kara Zor-El/Linda Lee (later Danvers) and Dick Wilson (later Malverne) grew up together in the Midvale Orphanage. They dated through college, but they grew apart after Linda (alias Supergirl) moved to San Francisco.

Several years later they meet again. Dick has several things to tell the young Kryptonian woman before his time runs out. And Supergirl remembers an earlier love during simpler times.

Not to be confused with the DC romance comics series of the same name.

Linda: That was the last time I saw Richard. Tonight I know what it is to be human. Tonight my super skin is still invulnerable, but my Richard is never coming back, and my heart is broken into a million pieces.