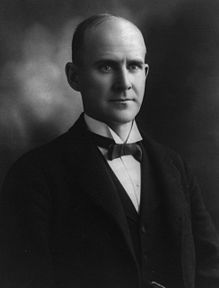 Eugene Victor "Gene" Debs (November 5, 1855 – October 20, 1926) was an American union leader, one of the founding members of the Industrial Workers of the World and five times the candidate of the Socialist Party of America for President of the United States. Through his presidential candidacies, as well as his work with labor movements, Debs eventually became one of history's best-known and most prominent socialists living in the United States.

Debs helped found the American Railway Union (ARU), one of the nation's first industrial unions. After workers in the Pullman car company organized a strike over pay cuts, Debs signed many into the ARU. He called a boycott of the ARU against handling trains with cars, in what became the nationwide Pullman Strike, affecting most lines west of Detroit, and more than 250,000 workers in 27 states. To keep the mail running, President Grover Cleveland used the Army to break the strike. As a leader of the ARU, Debs was convicted of federal charges for defying a court injunction against the strike and served six months in prison.

Debs was convicted a second time for denouncing U.S. participation in World War I. While in federal prison, he ran for President a fifth and last time. Debs developed cardiovascular problems in prison, which later killed him after he was pardoned and released in 1921.