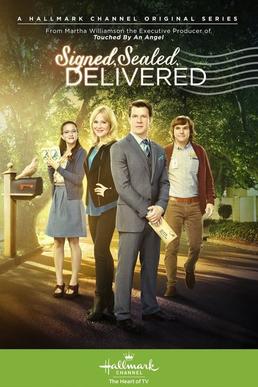 Signed, Sealed, Delivered (2014-) is a romantic dramedy that follows four postal workers from the "Dead Letters Office" in Denver, Colorado who track down intended recipients of lost letters. It first premiered as a TV Movie in 2013 before ratings prompted Hallmark to turn said movie into a Poorly Disguised Pilot for a full series in 2014. Starring Eric Maibus, Kristin Booth, Crystal Lowe, and Geoff Gustafson.

This show delivers examples of: