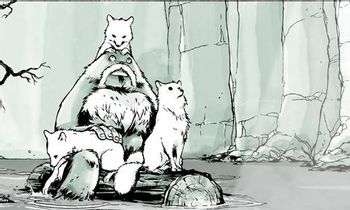 is an ongoing, Eisner award winning, webcomic series starring an Abominable Snowman, supported by a surprisingly rich cast of animal characters. The comic's world is rendered in a realistic style, along with all the personal styling that adds emotion to the characters who populate it. The main story arc following Charles' journey to an unclear destination occasionally shifts to soft, comedic glimpses of forest life.