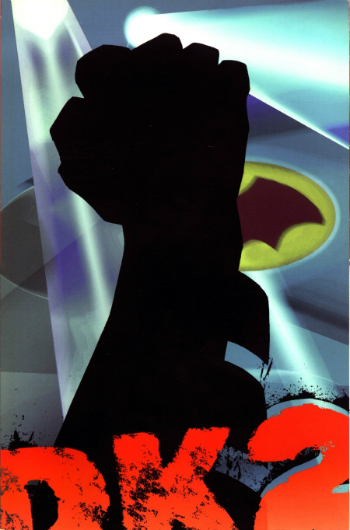 Set three years after the events of The Dark Knight Returns, the world has managed to go downhill since then—the President is a fake, and the police state of a world is run by Lex Luthor and Brainiac, who has many a hero enslaved.

Of course, Batman won't be having that, so he and his allies—Catgirl, the Green Arrow, and his Batboys—set out to change the world by judicious application of violence. But first, they need allies—and they need to deal with Superman, who is still in the thrall of the government...

Overall, it goes further off the deep end than The Dark Knight Returns, almost to the point of being a Deconstruction of the Darker and Edgier nature of the first story though, naturally, not everyone thinks that makes it any good. The color palette is much more varied than The Dark Knight Returns' muted colorization, taking it to an almost garish degree, that takes a little getting used to (many reviewers termed it ugly). It was eventually followed starting in 2015 by Dark Knight III: The Master Race.