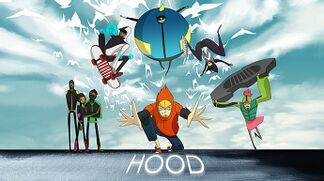 Hi-Fi, Lo-Fi, Sci-Fi.note  Counterclockwise from the bottom: Bird, Photocynthia, Parker, Loona, Plus/Minus, the Omega Triplets.
"Top three corniest things my great-aunt Bertha told me: Love conquers all, practice makes perfect… and you are what you wear… I hate it when that woman is right!"
-Bird
Advertisement:

There’s suffering from Development Hell and then there’s what happened to this series.

HOOD is (or was going to be) an animated series about a group of teenagers who wear hoodies that give them superpowers and use them to save humanity from evil threats. Their group consists of:

HOOD was intended to be an animated series produced in 2009 by Howie Shia and produced for Teletoon and Disney XD by Portfolio Entertainment. A trailer was released in 2009, the year it started in development. However, it was never released as a full series nor has there been any word on its development since. The trailer for it can be found here