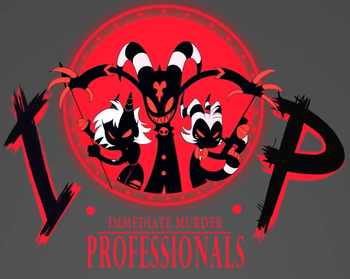 "When you want somebody gone,
And you don't want to wait too long,
Call the Immediate Murder Professionals!"

A startup assassination business in Hell that carries out its services on Earth. 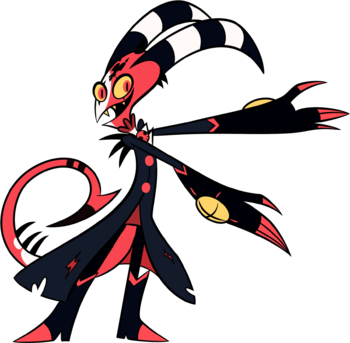 "Have you guys forgotten what service we provide?"
Voiced by: Brandon Rogers (English), Sébastien Mineo (French)

The founder and manager of Immediate Murder Professionals (I.M.P). An energetic but incompetent boss, Blitzo tries to motivate his employees to do a better job, but his methods leave a lot to be desired. The "o" in his name is silent.

"We aren't a family, sir! You are the boss! We are the employees!"
Voiced by: Richard Steven Horvitz (English), Rémi Gutton (French)

An assassin and I.M.P's resident weapons expert, as well as Millie's husband. Despite sticking out like a sore thumb amongst the generally murder-happy I.M.P team, he serves as the voice of reason among I.M.P - or, at least, he tries to. Blitzo never seems to actually heed any of his advice, much to his increasing frustration. 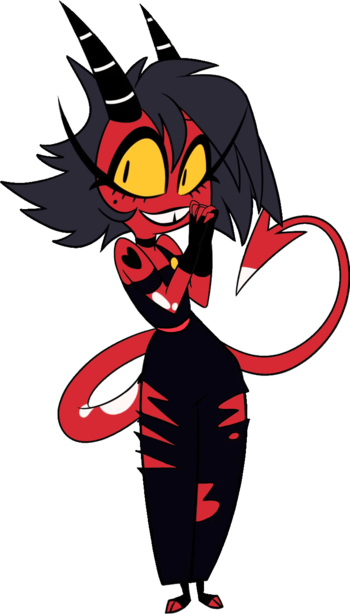 The bruiser of Immediate Murder Professionals and Moxxie's wife. While outwardly sweet and calm, she has a rather violent side to her that comes out at work. 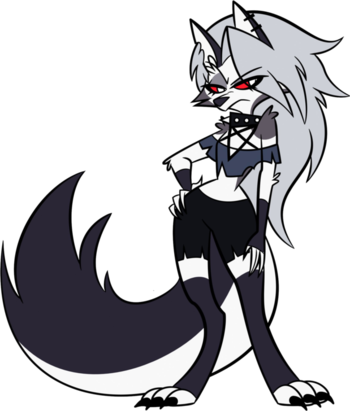 The receptionist of Immediate Murder Professionals. Loona is an apathetic, lazy, mean-spirited hellhound who would rather be doing anything but work, but she manages to keep her position thanks to Blitzo's incessant coddling. 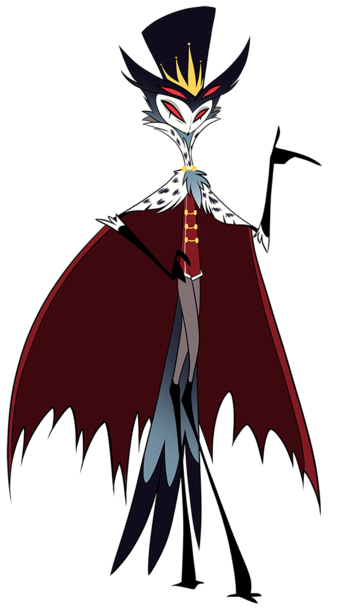 An Owl-like demon prince who is responsible for granting I.M.P the grimoire required to access Earth. (Un)fortunately for Blitzo, however, the way he initially acquired said grimoire also left Stolas deeply infatuated with him, and he doesn't intend to quit anytime soon. 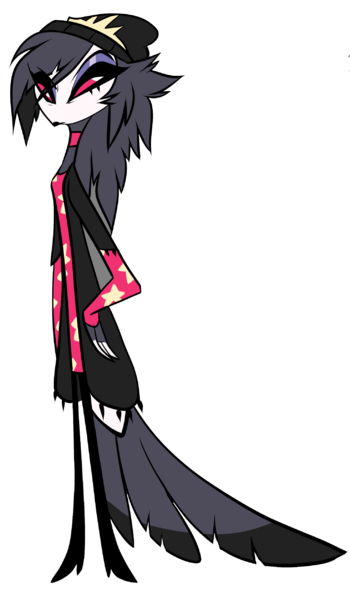 "This song is called 'My World is Burning Down Around Me', it's by 'Fuck You Dad'. It's a band."
Voiced by: Barrett Wilbert Weed, Juliana Sada (Child) 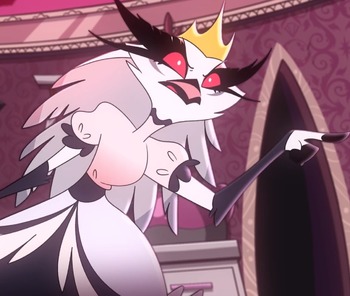 "You are a goddamn embarrassment! I'm not spending another moment looking at your pathetic, imp-sucking face!"
Voiced by: Georgina Leahy 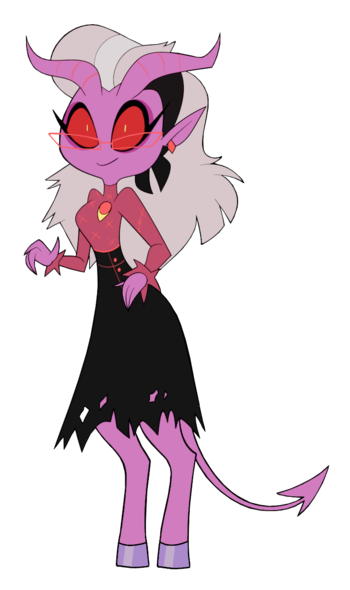 Click here to see her when she was human 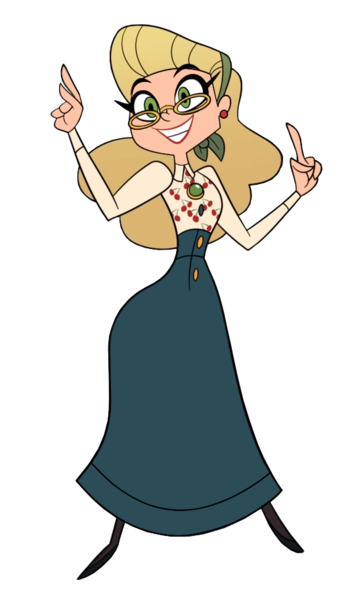 "So that's why I'm here. To get my revenge."
Voiced by: Mara Wilson

A former teacher who ended up in Hell after a murder-suicide. She ends up conscripting I.M.P to murder Martha, her husband's mistress and the only survivor of said murder-suicide. 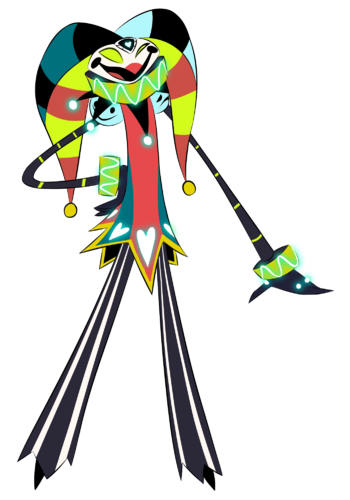 "Real or not though, people love me! Does anybody love you...Blitz-o?"
Voiced by: Alex Brightman

A jester demon who's in the employ of Mammon as a mascot and spokesperson. An animatronic replica of him known as Robo Fizz that Blitzo has a past with from his time as a clown appears in the episode "Loo Loo Land" as an attraction in the titular theme park. 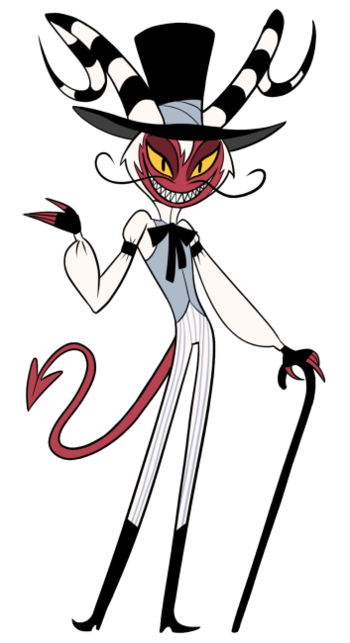 "Name’s Wally Wackford, and I am looking for creative new people to exploit! I mean employ..."
Voiced by: Don Darryl Rivera 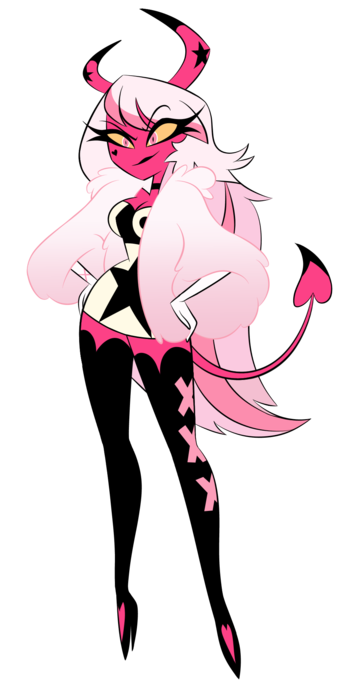 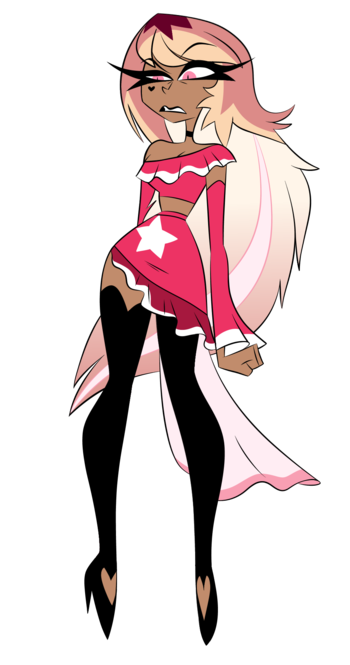 "They let me out because I'm still famous, and rehab is for sad, loser wash-ups. So your sister says hi."
Voiced by: Cristina Valenzuela

A famous succubus popstar that Blitzo once dated in the past. 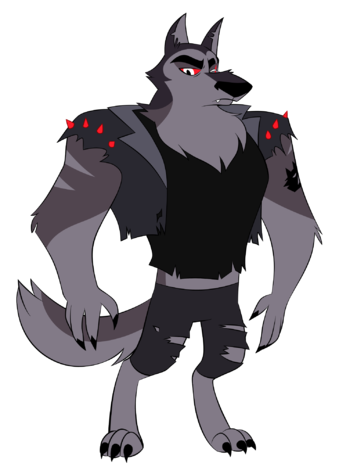 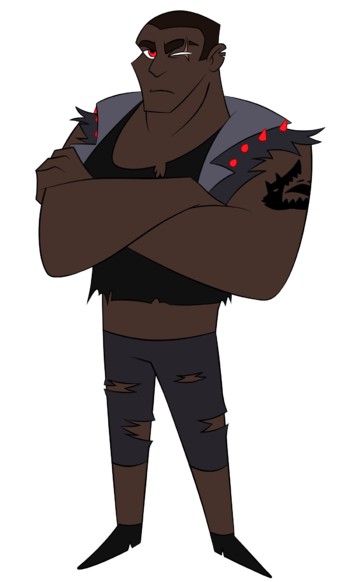 "It's cool, her beef ain't mine. I'm not paid enough to care."
Voiced by: James Monroe Iglehart

A hellhound who works for Verosika as her bodyguard.

Click here to see him when he was young and human 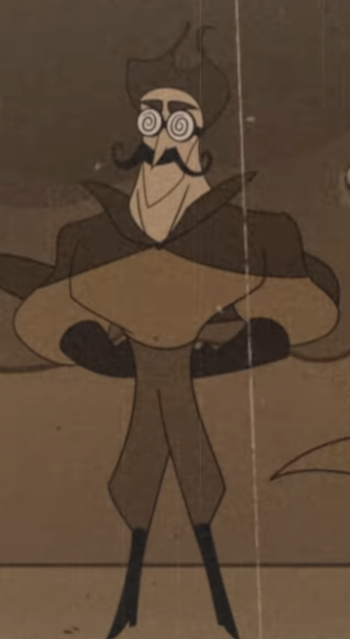 "I am eccentric and must therefore do eccentric shit!"
Voiced by: Brandon Rogers

An eccentric robotics inventor who ended up in Hell after being accidentally turned old from a machine that he and his business partner created and dying from a heart attack. Upon arriving in Hell, he immediately hires I.M.P to kill his business partner who survived the accident and became the sole beneficiary of their technological empire. 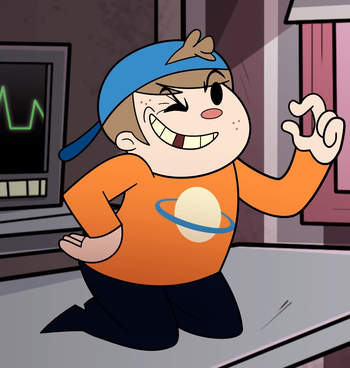 An extremely mean kid that Moxxie accidentally shot on one of I.M.P's jobs.

Martha and her Family (Episode 1 Spoilers) 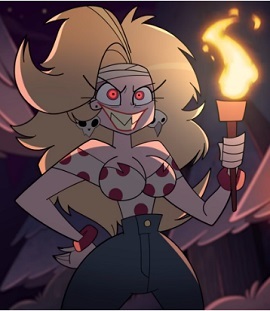 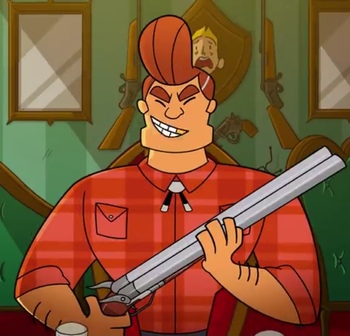 "Whatever it is… They’re gonna be tomorrow night’s dinner!" 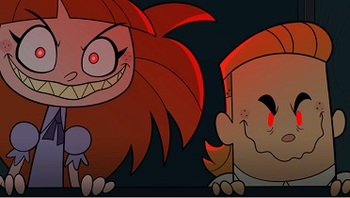 "It’s nice to have a new critter to play with."
Martha voiced by: Jerick Hoffer (Credited as Jinkx Monsoon)
Ralphie voiced by: Maxwell Atoms
Children voiced by: Juliana Sada and Dashiell McGaha-Schletter

A woman who was considered a hero after she survived being shot by Mrs. Mayberry, alongside her loving family. The mother's actual personality is... far less morally upstanding in reality, and that's not even getting into their family pasttimes

Ralphie and the kids 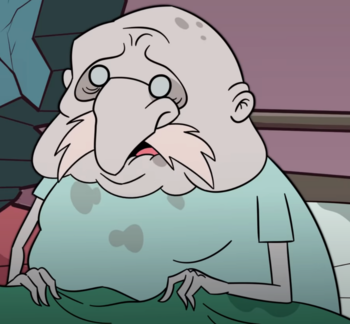 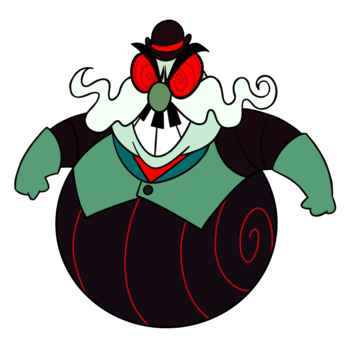 "I’ve never wanted to die more than I do now!"
Voiced by: Michael James Ruocco

The business partner of Loopty Goopty, who survived being accidentally turned old from a machine that killed his business partner. He becomes I.M.P's target as issued by Loopty.

"Luckily for you,
There's something we can do.
We can help keep them alive,
So you can watch them thrive!"

An organization run by Cherubs that serves as the opposite of I.M.P, in that it protects humans from dying. 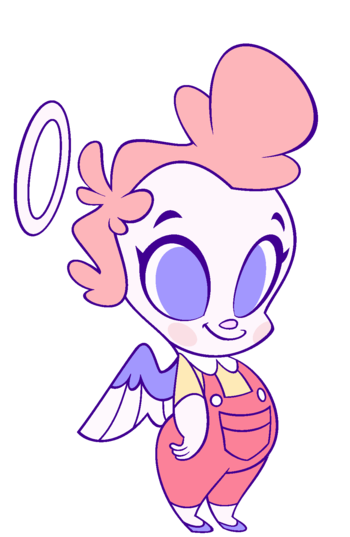 "Welcome to Heaven! Guess you did something good to get here."
Voiced by: Don Darryl Rivera

The baby-like cherub leader of C.H.E.R.U.B who's essentially Blitzo's parallel. 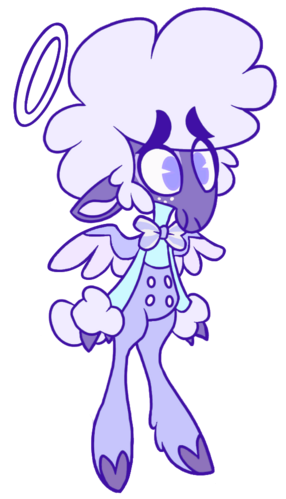 "We're just trying to do our j-j-j-job!"
Voiced by: Jayden Libran

A blue/purple anthropomorphic sheep cherub in the employ of C.H.E.R.U.B who essentially serves as Moxxie's parallel. 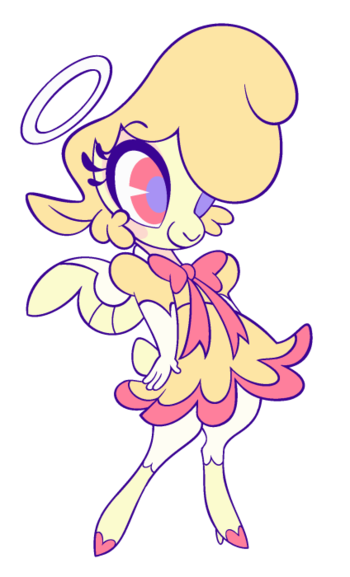 "That is so inappropriate!"
Voiced by: Vivienne Medrano

A yellow anthropomorphic sheep cherub in the employ of C.H.E.R.U.B who essentially serves as Millie's parallel. 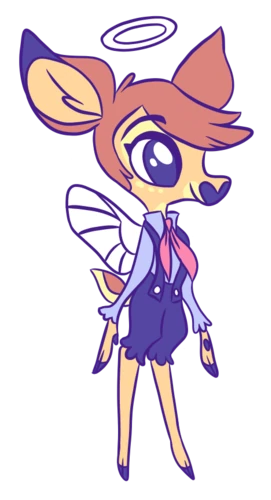 An anthropomorphic deer cherub that appears near the end of C.H.E.R.U.B's debut episode to ban them from heaven.