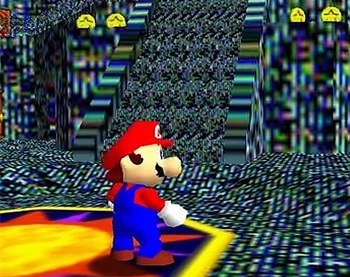 Trust us, this is the least weird part of this hack.
"I modified the original SM64 to randomly patch Gameshark codes I found on the Internet (or made myself) to the game. This resulted in a pretty funny, unstable, and frustrating game. Don't take this too serious and don't try to get any progress done in the game. You won't."
—Kaze Emanuar, the creator of the hack

Super Mario 64: Chaos Edition is a peculiar rom hack of the iconic portly plumber platformer of the same name, created by Kaze Emanuar. On its surface, it seems to play identical to the original game, but as it unravels, it has more than a few surprises awaiting.

The hack has become considerably popular due to playthroughs by online gamers like Vinesauce.