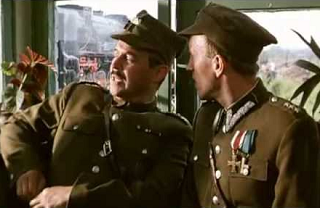 And remember - I was never here in the first place!
Advertisement:

It is 1945 and the Soviet occupation of Poland has been complete for some time. Captain Andrzej Kwiatowski, a gynecologist-turned-surgeon, has been given a vacation with a help of one of his grateful patients, a colonel in the UB - State Sec for the forming PRL. While on leave, he takes a Girl Next Door to a date at a fancy hotel. Ending up punching a drunk Soviet colonel, to save his skin he demands an instant call to the Minister of Security, pretending to be a high-ranking security officer himself. This audacious act proves spectacularly successful. Hilarity Ensues as Kwiatkowski continues to use his sharp wit and the Communist Newspeak to skillfully turn its intended meanings inside out and manipulate the unwitting Party faithful to do his bidding, while helping out all sorts of people who have run into difficulty with the new regime.