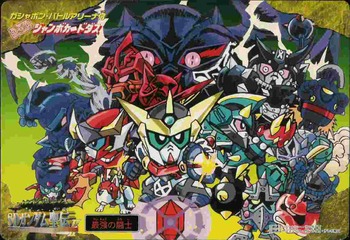 SD Gundam Seidan is a Cardass series in the Knight Gundam series released in 1997.

In the world of Llion Cardzi, a young Gundam named X goes on a journey in order to fulfill his dream of becoming a knight. To do this, he must first master the swordsman, warrior, and mage classes. In his journey, he faces off against the Demon King Army.

Since it takes place in the alternate world of Llion Cardzi and not Saddrac World, this story can be considered a spin-off of sorts for the Knight Gundam series. Its characters are based off of After War Gundam X and Mobile Suit Gundam: The 08th MS Team.

It was cancelled after 2 chapters due to stagnant sales, but received completion in the form of both its Manga adaptation and SD Gundam Ultimate Battle.