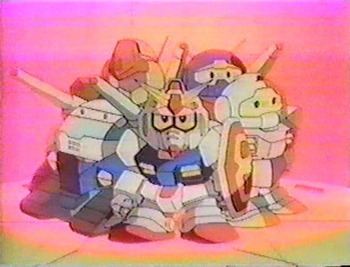 This one's a bit of a doozy to explain. Doozy Bots was a proposed American cartoon made by Sunrise that was intended to debut in Fall 1991, but never got picked up. Its purpose was to try to appeal Gundam to Western audiences by using the SD Gundam designs.

Professor Doozy enlists the help of five students of his - Max, Polly, Scossie, Wipe-Down, and Cole - to deal with his first generation of robots, who have gone rogue and are now determined to "rob the world of fun". To make them capable of fighting back, he trusts them to an experiment of his to transfer their minds into newer robots known as "Doozy Bots" - Gundam (Max), Guncannon (Scossie), Guntank (Cole), Re-GZ (Wipe-Down), and GM (Polly).

It only spawned an infamous 4-minute pitch that never actually led to anything, and is nowadays considered one of the most obscure and harder-to-find elements in the entire Gundam franchise, with only videos and reactions of said pitch to its name.

Tropes associated with Doozy Bots are: