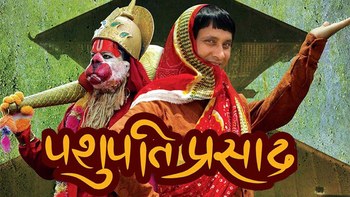 "Don't you dare look down upon me as impoverished. I shall not even lay to rest the ashes of my parents until I pay back your debt."
— Pashupati Prasad, to his father's landowner

Pashupati Prasad is a 2016 Nepali movie directed by Dipendra Khanal. The script-writing was done by Khagendra Lamichhane, who plays the eponymous Pasupati Prasad.

The main plot of the movie goes like so: Pashupati's parents die in the 2015 Nepal quake before they can pay back their debt to their landowner (jamindar). With the jamindar threatening to seize his family's land, it now rests upon Pashupati's shoulders to clear the debt so that his parents may enter heaven.