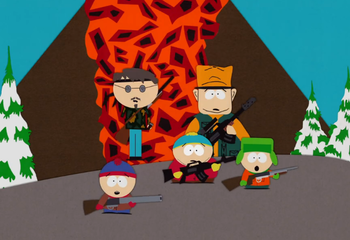 "That lava is comin' right for us!"

Cartman, Kyle, Stan and Kenny go camping and hunting with Stan's Uncle Jimbo and his buddy Ned. Stan ends up unable to kill any of the animals, but Kenny has no problem and Jimbo gives him more attention than Stan, which makes Stan unhappy. Meanwhile, a nearby volcano erupts and unless something's done, it'll destroy South Park.