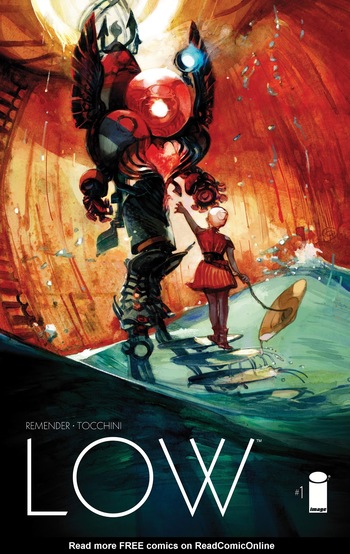 Far, far in the future, the sun has expanded in size, rendering the land on Earth too hot for humanity to survive there. Underwater cities were constructed, but this is a stopgap solution, and so probes were sent out into the galaxy to try to find somewhere else capable of supporting human life.

In one city, Salus, lives the Caine family: father Johl, mother Stel, and the children, Della, Marik, and Tajo. They're generally happy, although life is no longer easy. But on a routine hunting trip outside the city, they are attacked by pirates known as "Scurvies." Johl is killed and Della and Tajo are abducted, leaving Stel to raise Marik and hope, always hope, that someday she might see her daughters again, and that they all might find some way to survive. And then, years later, one of the probes returns to Earth and might, just might, have brought back good news.

Low is a comic series from Image Comics, written by Rick Remender and drawn by Greg Tocchini. It started publication in 2014; there's been a fair amount of Schedule Slip, but Remender expects to finish up the series in 2020.