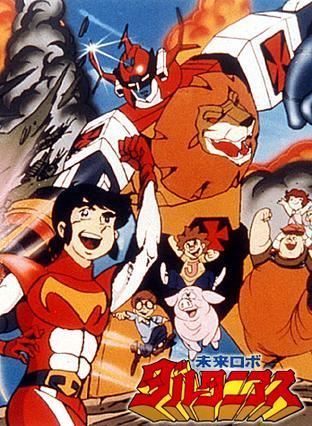 Oh, what could have been...
Advertisement:

The Super Robot anime Mirai Robo Daltanious aired in 1979. Although Art Director Tadao Nagahama was on the crew, this show was not part of his famous Robot Romance Trilogy. In fact, this was actually his last work before his death.

In the then far off year of 1995, Earth has been conquered by the evil Zaar race. With all of Earth’s cities reduced to ruins, humans have been living in smaller shantytowns and villages. One day, war orphan Kento, his friend Danji and a few others stumble on the secret base of one Dr. Earl. Originally from Helios, a planet conquered by the Zaar, Dr. Earl has with him the Humongous Mecha Daltanious, composed of the humanoid robot Atlaus, the sentient lion robot Beralios, and the spaceship Gunper. With Kento controlling Atlaus and Danji flying Gunper, Daltanious takes charge against the aliens.

On December 14, 2020, Discotek Media revealed they gained the rights to the anime and will be releasing the series stateside in 2021.

This show features Examples of: